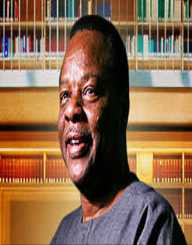 Molefi Asante graduated from the Nashville Christian Institute (1960). As a student he took part in the Fisk University student marches through Nashville, which was part of the Civil Rights Movement activities in the 1960s. After high school, he studied at Southwestern Christian College of Terrell in Texas. He then attended Oklahoma Christian University and was awarded a B.A. degree (1964). Asante went on to do graduate work at Pepperdine University and obtained an M.A. based on his thesis of Marshall Keeble. In 1968, was awarded his doctorate in communications from UCLA.

In 1969, Molefi Asante was a co-founder of the Journal of Black Studies. He was the director of UCLA’s Center for Afro American Studies (1969-1973) and then became chair of the Communication Department at SUNY-Buffalo (1973-1980) before spending time in Zimbabwe where he trained journalists (1980-1982).

Publications include The Dramatic Genius of Charles Fuller, African American Traditions, Facing South to Africa, As I Run Toward Africa, The African American People, Scattered to the Wind and 100 Greatest African Americans. His text, African American History: Journey of Liberation, 2nd edition is used in over 400 high schools in North America. He has often appeared on television including the Today Show and 60 Minutes.

Molefi Asante has received numerous awards and acknowledgements including the Douglas Ehninger Award for Rhetorical Scholarship (2002) from the National Communication Association.  In 2004, he gave one of the keynote addresses at the Conference of Intellectuals of Africa and Diaspora held in Dakar. He has been inducted into the Literary Hall of Fame for Writers of African Descent (2004).

Molefi Asante was made a traditional king in Ghana in 1995. He was also given the title Wanadoo of Gao in 2012 in the court of the Amiru Hassimi Maigo of Songhay. He is married to Ana Yenenga, and they have three children: Eka, Mario, and MK.