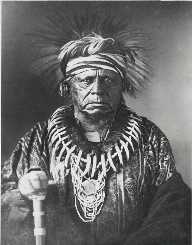 Nineteenth Century Native American leader Keokuk was probably born in the late 1780s along the Rock River. The place of his birth was the tribal village of Saukenuk situated near the mouth of the Rock River.

The area is located in the present-day Rock Island, Illinois, United States of America. He hailed from the Fox community and was the son of a Sauk warrior of that clan. His mother, Lallote, came from a mixed descent and was part, French.

Keokuk grew up in a village called Peoria, Illinois on the Illinois River. He did not belong to the customary ruling upper-class people. In spite of this difference, the members of the tribal council elected him as one of them.

A skillful orator and a brave warrior, Keokuk made a name for himself during the War of 1812. His excellent physical capability, oratorical supremacy, sharp, intelligent mind, and persuasive skill were the main reasons behind his political ascendancy.

Keokuk rose to prominence during the War of 1812. A particular other community under their leader called Black Hawk supported the British and joined hands with them. He held on to his tribe and prevented them from deserting their village.

Many of the warriors of his tribe had joined the Black Hawk before his intervention. The remaining village people elected him as their war chief. In return, he successfully protected them from any outside intrusion.

The fast-approaching White settlers gradually came closer to the places where ancient tribal people resided for generations. Keokuk and Black Hawk had different views about this problem. While Keokuk was in favor of a mutually agreed concession, dialogue, and accommodation peacefully with these settlers, Black Hawk wanted to resist them by force.

However, Keokuk had the foresight of not indulging in any armed conflict with the white settlers. He knew that these white settlers were far more superior in all aspects than his tribe. Confronting them directly would have been disastrous for them. Hence, he chose the path of peace and surrender and tried to cohabit with the White settlers elegantly.

In the late 1820s, the White colonial government wanted the Sauk and Fox (community of Black Hawk) tribes to accommodate the White settlers by moving westward.

Keokuk made the tribes under him oblige the government directives. In 1832, his lifelong rival Black Hawk led a brief resistance against the encroachment of the White settlers. However, Keokuk conveyed Black Hawk’s intended plan in advance to the U.S. Indian agent stationed there at Rock Island.

The then United States government suitably rewarded Keokuk for his lifelong contribution in accommodating the White settlers. Government authorities made him the leader of the Sauk nation. Keokuk showed his gratitude by deserting their Illinois settlement and moving to Iowa. However, he had to sacrifice the settlement of his tribes repeatedly for the benefit of the White settlers.

Finally, in 1845, he and his people reached a new place reserved for them near Ottawa, Kansas. He died in his new settlement in June 1848. His death is attributed to many probable causes including poisoning by a disgruntled surviving member of the Black Hawk gang, alcoholism, and dysentery. In commemoration of his legacy both Keokuk County, Iowa and Keokuk Town, Iowa was named after him.