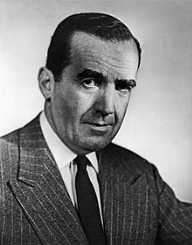 Edward Roscoe Murrow was a pioneer American radio and television broadcaster. Born on April 25, 1908, he played a pivotal role in America broadcast journalism during its early years. Murrow became one of the influential broadcasters in America. He first came to the limelight as a war correspondent during World War II. Working with a team of other war correspondents later known as the Murrow Boys, he did some live radio reports from Europe for CBS news.

Egbert Roscoe Murrow was born on April 25, 1908, in Polecat, in Guilford County of North Carolina. He was the youngest of three sons by Roscoe Conklin and Ethel F. (née Lamb) Murrow. At the age of six, the family moved to Skagit County, Washington, where they homestead near Blanchard. Murrow received high school education in Edison. Following his graduation, he enrolled entered the Washington State College (currently Washington State University) Pullman, majoring in speech. From 1929 to 1931, he was the president of the National Student Association. It was during his university days that he changed his first name from Egbert to Edward. He graduated with a bachelor's degree in 1930.

Following his graduation, Murrow moved to New York. While there, he served as an assistant director of the Institute of International Education. He held the position from 1932 to 1935. Also, he became the assistant secretary of the Emergency Committee in Aid of Displaced Scholars. The organization assisted German scholars dismissed from their academic positions by the Nazi government.

Murrow gained national attention for his eyewitness report on the March 1938 Anschluss, during which German Nazi-annexed Austria. His later timely and accurate reports on events like the 1938 Munich Conference and the German occupation of Czechoslovakia in 1939 added to his fame. He subsequently reported the Battle of Britain during World War II. Murrow became an icon, and his style of reporting was somewhat a radio journalism revolutionary.

Upon his return to the US in 1941, CBS organized a dinner in his honor, attended by about 1,100 guests. Murrow and Bill Shadel became the first reporters to visit the Buchenwald concentration camp in Germany on April 12, 1945. He became the vice president of CBS and head of the network’s news in December 1945. In September 1947, he returned to radio taking over a weeknight newscast. He hosted the show, This I Believe form 1951 to 1955. The programme allowed ordinary people to speak on the radio for five minutes. In partnership with producer Fred W. Friendly, he recorded the series, Hear it Now, for Columbia Records. This record would later into the weekly CBS Radio Show, Hear It Now hosted by Murrow.

Murrow began his television career in the 1950s by appearing on the CBS Evening News. The following year, he started the series, See It Now, on television. The show focused on controversial issues. It is best known for its critic of McCarthyism and the Red Scare. This eventually caused the political downfall of Senator Joseph McCarthy. From 1953 to 1960, he produced the weekly TV show, Person to Person. Murrow started having friction with CBS chairman, William Parley, due to his reporting style. Consequently, he resigned in 1960.

Following his resignation, Murrow accepted a position from President John F. Kennedy, as director of the US Information Agency in 1961.

Murrow and Janet Huntington Brewster married on March 12, 1935. The couple had a son Charles Casey Murrow. Murrow was a chain smoker and allegedly smoked fifty to sixty sticks of cigarette a day. As a result, he developed lung cancer. He, therefore, underwent an operation to remove his left lungs. Murrow died on April 27, 1965, at his Pawling, New York home. He was 57 years.

Edward Murrow received several honors including Alfred I. DuPont Award, 1947, and Grammy Award for Best Spoken Word Album, in 1967. On March 5, 1965, Queen Elizabeth II honored him Knight Commander of the Order of the British Empire.