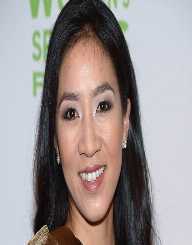 Michelle Wingshan Kwan was born on July 7, 1980, in Torrance, California. Her parents were both immigrants from Hong King. Kwan became interested in skating from an early age when she began to accompany her older brother to hockey practices and her sister to figure skating classes. She began serious training when she was eight years old, practicing around four hours a day. Her demanding schedule was hard on the family, and by the time she was ten, the Kwan family could no longer afford to pay for her trainer. However, Kwan was offered financial aid from the Los Angeles Figure Skating Club and began training at the Ice Castle International Training Center in Lake Arrowhead, California.

Kwan went skating at 5 AM every morning before school and then trained more afterward. She went to Soleado Elementary School, but in 1994 began homeschooling. In 1998, she graduated from Rim of the World High School and enrolled in UCLA. She attended the college for one year, and then transferred to the University of Denver. She graduated in 2009 with a Bachelor’s degree in international studies, as well as with a minor in political science. After college, Kwan began to study at the Fletcher School of Law and Diplomacy at Tufts University.

In 1994, Kwan placed second at the U.S. Championships but did not qualify for the 1994 Olympic Games, since the spot was given to Tonya Harding and the 1993 champion Nancy Kerrigan. She participated in the 1994 and 1995 World Championships. In 1995, Kwan was overall fourth in the World.

In 1996, Kwan began to develop more artistic and mature style. She improved her techniques and began to perform more difficult choreography. That year, Kwan won both United States and World Championships. The following season, Kwan was struggling with her jumps due to a growth spurt and new skating boots from an endorsement contract. These difficulties led to the loss of 1997 U.S. Nationals and 4th place in World Championships. In the 1998 National Championships, Kwan regained her U.S. title, qualifying for the 1998 Olympic Games in Nagano, Japan. She was one of the top favorites to win the gold medal but ended up winning silver.

During the 1998-1999 season, Kwan participated in several events made for television. She won the U.S. Championships and placed second in the World Championships. In 2000, she began working together with the famous fashion designer Vera Wang, who made her costumes for the next six years. In 2001 U.S. Championships, Kwan arrived with no coach, nevertheless, won the competition and secured a place on the 2002 Olympic team. She began working with coach Scott Williams and continued on her Olympic-eligible circuit. Kwan also hired a new technical coach and severely improved her programs technical difficulty. With this, she was able to win the U.S. championships and World Championships in 2004.

In the 2004-2005 season, Kwan won her 9th United States title. However, there was a new system of judging at the World Championships, and it became the first year Kwan did not win any medal since 1995. In 2006, Kwan was forced to withdraw from qualifications to the 2006 Olympic games in Turin, Italy due to an injury. In the 2005 season, she had to withdraw for several competitions. She petitioned to the United States Figure Skating Association for a medical waiver to be placed on the Olympic team. She got the waiver and performed her programs for the panel to be confirmed.

In February 2006, Kwan suffered a groin injury and withdrew from the Olympic team. She underwent surgery to repair her hip and skipped the 2006-2007 season. Her first on-ice appearance after surgery was in 2009 when she performed at Ice All Stars. She also announced that she would be a commentator in the 2010 Winter Olympics for ABC News.

In 2006, Kwan was announced as a public diplomacy ambassador by Secretary of state Condoleezza Rice. She traveled extensively for the position, representing the American values to young people and sports enthusiasts. She made her first overseas trip to China, later traveling to Russia, Argentina, Ukraine, South Korea and Singapore. In 2011, she began serving as the adviser to the U.S.- China Women’s Leadership

Kwan has also made several on-screen appearances. She starred as herself in The Simpsons, Family Guy, and Sabrina the Teenage Witch. She also provided her voice in the movie Mulan II. In 1998, she signed with Disney Publishing Worldwide for an 8-book deal meant for children. In 2009, Kwan became a member of the President’s Council on Physical Fitness and Sports.

In 2012, Kwan got engaged to American lawyer and director for strategic planning on the National Security staff at the White House Clay Pell. The couple married in 2013. Vera Wand designed Kwan's wedding dress. However, in 2017, Pell filed for divorce.