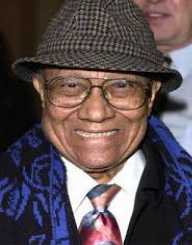 Fayard Nicholas is one of the dual dancers known as The Nicholas Brothers. Despite their skin color, the duo became one of the most famous and loved dancing group in the 1930s and 1940s in Europe and America.

Together with his brother, Fayard is remembered for starring An All-Colored Vaudeville Show in 1935, Stormy Weather in 1943 and The Pirate in 1948.

Fayard Antonio Nicholas grew up in a family of artists. His father was a drummer and his mother a pianist. He was born on October 20, 1914, in Alabama.

He and his brother started performing to high flying songs and dance routines in New York City at a young age.

Fayard Nicholas perfected his dancing style as a youth, his remarkable tap and ‘flash dancing' became his signature. The duo made their first appearance on a Famous Cotton Club based in New York in 1932.

The two were also known for tap dancing style; they were popular in the jazz music scene during the Harlem Renaissance.

They made an appearance in Ziegfeld Follies on Broadway, where they worked with Buddy Bradley, a jazz choreographer, an appearance that opened doors for the duo in the film industry.

Fayard Nicholas went on to feature in more than 60 films, his most famous one being The Stormy Weather.

Fayard Nicholas debut in the film industry came in 1934 when he appeared with his brother in Kids Millions. The duo performed two years later in The Big Broadcast and Blackbirds.

While making their first appearance in the Broadway, they encountered some top European ballet companies.

Nicholas and his brother acquired celebrity status; they were regarded as the best dance team in America.

Fayard Nicholas was awarded Tony Award in 1989 for his performance in musical Black and Blue.

During their careers, they managed to dance for nine American Presidents, receiving Kennedy Center Honors.

In 1994, The Nicholas Brothers received a star on the Hollywood Walk of Fame.

Many dancers across the world including, Gregory Hines and Savion Glover continue to receive inspiration from The Nicholas Brothers.

Fayard Nicholas went into three marriages. First with Geraldine Pate, after the two went separate ways, he tied a knot with his second wife Barbara January.

His career led him to his third wife Katherine Hopkins who was also a dancer.

The Nicholas Brother came to an end in 2000 when his brother succumbed to a heart failure leading to his death.

At the age of 91, Fayard Nicholas was diagnosed with pneumonia.  He died on 24th January 2006 in California.