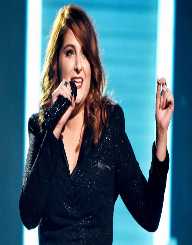 Meghan Trainor was born on December 22, 1993, in Nantucket, Massachusetts, USA. Her parents are Kelli and Gary Trainor. Her brothers are Justin and Ryan Trainor.

As a teenager, Meghan Trainor attended Nauset High School. While there, she was a member of a jazz band, as well as another band. She al practiced singing and songwriting. Also while still in high school, she attended the Berklee College of Music’s Performance Program twice. She often entered singing and songwriting competitions as well, where she often won impressive awards.

In 2014, Meghan Trainor signed on with Epic Records. By signing on with this recording company, her self-recorded albums were taken out of circulation. The first song/single she recorded after signing on with Epic Records was possibly her most famous single “All About That Bass.” This song reached #  1 on the music charts all around the world, including in the United States, Canada, and the UK. In the same year, Meghan Trainor also released the single “Lips are Moving.” This single was also popular, but not as successful as her first. It did not reach #1 on any charts but was in the top 5 in the United States, Australia, New Zealand, and the UK.

In 2015, Meghan Trainor released her first full-length album with Epic Records: Title. This album was her most successful to date, reaching #1 in the United States, Australia, Canada, New Zealand, and the UK. This album also reached the RIAA Triple Platinum status. Also in this same year, she released the Extended Play Spotify Sessions and the singles “Dear Future Husband” and “Like I’m Going to Lose You.” Both of these singles were extremely successful, with both reaching multiple Platinum statuses.

Meghan Trainor released her most recent album with Epic Records, Thank You, in 2016. This album was not as successful as her first but still did well on the charts. It did not reach #1 but was in the top 5 in the United States, Australia, New Zealand, Canada, and the UK. In the United States alone, the album had sold over 200,000 copies. Also in this year, she released the singles “No,” “Me Too,” and “Better.” Both “No” and “Me Too” were extremely successful, reaching RIAA Double Platinum ratings.

Over the course of her short career, Meghan Trainor has already won over a dozen awards and has been nominated for over fifty others. Some of her most impressive awards are listed below.

Meghan Trainor is currently (as of 2018) engaged to Daryl Sabara, an actor famous for his child-star role in Spy Kids. There is currently no wedding date set for the couple.