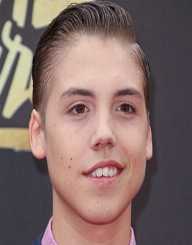 Creativity and craftsmanship are what is ruling social media presently and to reach out to the broader community; you can not do away with social media. Having a strong presence and becoming famous on the web needs a calculated effort, talent, and creativity. Some are doing that using their beauty, though but the primary requirement is being creative. There are several already famous and up and rising stars including Matt Espinosa.

Born on July 7, 1997, Matthew Espinosa is an American actor, Viner, and YouTuber. He is currently gaining fame with the speed of light on social media platforms. Some people suggest he reached a celebrity status now because he resembles Justin Bieber, but no, the young chap is doing something positive and needs recommendations for that. He has not only rocked on his looks but does new contents that fascinate his fans.

Matthew has a strong presence on Vine with over 6.3 million followers and 5.5 million followers on Instagram. He is also doing fantastically well on YouTube with over 2.13 million subscribers and with 3.9 followers on Twitter. Matthew aside from his standalone fame is a member of the social media group MagCon Boys with other members like Jack Johnson, Shawn Mendes, Jacob Whitesides, Aaron Carpenter, Jack Gillinsky and Taylor Caniff. He also made an acting debut in the film Be Somebody.

Matthew Espinosa was born on July 7, 1997, in Woodbridge, Virginia in the United States of America to Rafael and Laura Espinosa. He has two brothers Ryan and Dylan and a sister Kristen. As a kid, Matthew was involved in sporting activating and played football. He had his education at Bishop Ireton High School where he also partook in sports including playing lacrosse. Aside from games, he loves playing the piano.

Matthew Espinosa's childhood life exhibited that of a star to be making his dad give him the nickname, Mr. Hollywood and that seems to be coming to fruition per his immense popularity now. First taking advantage of the prospects of Vine, Matthew has now become a social media sensational.

Matthew Espinosa rise to fame is not by accident but can be said as a calculated effort and steps he took during his early years. His father also saw that stardom in him and so gave him the nickname, Mr. Hollywood, and that has undoubtedly come to fruition with his debut in the film Be Somebody. His quest for greatness even at childhood days made him take part in several activities including sports. His dreams finally came true after the launch of the social media app, Vine.

Matthew Espinosa took to the platform to show his talent through posting interesting videos, which brought him instant attention. He has since not looked back as he took his ability to other media platforms like Instagram, Twitter, and YouTube. Matthew now has a strong presence on social media with 6.3 million followers on Vine, 5.5 million followers on Instagram and 3.9 followers on Twitter. His YouTube account has over 2.13 million subscribers and still counting. Isn’t that interesting? His inclusion in the social media group MagCon Boy also adds up to his fame. He also has a good relationship with fellow social media fanatics like Kian Lawley and Jc Caylen.

Matthew seems to have found a sweet and caring love in actress Jessica Serfaty. The two are currently enjoying a lovely relationship with much hope.