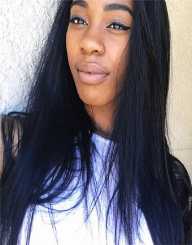 Alli Fitz best known as Allicattt is a Canadian social media social media enthusiast and an aspiring actress and singer. Born on September 10, 1993, he gained popularity after the creation of her Vine account. The account initially created to follow her celebrity crush, Tyler the Creator would later get her to prominence. She currently has over 4.7 million followers on Vine and about 3 billion video views. Allicattt is also visible on musical.ly with about 2.2 million fans. As a singer, Allicattt released her debut single, a cover of Hair on iTunesin February 2017. She subsequently uploaded the video to the song on her Allicatt YouTube Channel. She has worked with brands like Universal Records, The Hunt, and Ritz Crackers.

Allicattt was born on September 10, 1993, in Wilberforce, Ohio. Much is not known about her childhood life, family, and educational background.

Allicattt became a social media enthusiast with the creation of a Vine account, which was initially to follow her celebrity crush Tyler the Creator. Less did she think that the account would later gain her fame on social media. Today, Viner Allicattt has gained about 4.7 million followers on the platform with about 3 billion video views. She is famous for short comedic video son sketchesabout school which spans fromsegments like “studying," “911 what is your emergency" and freak-out. This short but intense video is what has gained her prominence. With a strong presence on Vine, she also created the YouTube channel AlliCattt with segments like Q&A #AllieChattt videos and the Saturday song lyrics analysis.

She has about 350,000 YouTube subscribers, about 610,000 Instagram follower and over 208,000 Twitter followers. Her intense social media presence has gained her deals with brands likeThe Hunt, Dick's Sporting Goods, MTV, Ritz Crackers, Fanta, Universal Records, and Skout. Some of her videos are done in collaboration with her favorite Viners. She has also made friends with other popular Viners like Lele Pons.

Allicattt fan base is basically teenagers because of the materials she posts which are academic related. Not only that but how she is able to infuse humor into her videos to make it lively and easy to adapt. She also allocates time to speak about things she wants to be changed and empathize with her public by relating to their situations. As an aspiring singer, she has gained substantial likes for her singing abilities too. Nonetheless, many of her fans now see her as deviated from her initial topics. She has been accused of sounding more racist now which has made her a victim of social media attacks sometimes

Allicattt dated Chad Jaxon Perez who she sometimes featured in her works. She was also rumored to have dated Scotty Wire.