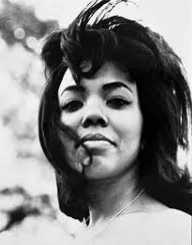 Mary Wells was born on May 13, 1943. She was an American singer. She was renowned for her contribution to defining ‘Motown’s’ sound. She died at the age of Forty-nine.

Mary Wells was born Mary Esther Wells on May 13, 1943, in the surrounding of Detroit’s Wayne State University. She was brought up alongside two siblings. In 1945, Wells was diagnosed with spinal meningitis.

She suffered partial paralysis, partial blindness, and deafness. She was singing in the aim of comforting herself due to the pain she was undergoing. Wells was performing in church choirs at her early age. In 1953, she suffered tuberculosis.

Mary Wells later moved from singing in church choirs to local nightclubs within Detroit. In 1960, she graduated from Northwest High School, Detroit.

In 1960, Mary Wells performed for the first time at Tamla Records. Due to her impressive performance, she recorded her first single ‘Bye Bye Baby’. She was afterward signed in the Motown record label. She after that released the song. In 1961, the song hit number eight in the R&B chart.

It later made number forty-five in the Pop singles chart. In 1962, Wells alongside Robinson released a hit single ‘The One Who Loves You.’ This single made number 2 on the R&B chart and number 8 on Hot 100. Motown Records released ‘You Beat Me to the Punch’ which landed Wells on the nomination to the Grammy Award.  She also released ‘Two Lovers’ which was her third single. Her album ‘The One Who Loves You’ was released as her second album.

In 1963, Mary Wells released ‘Laughing Boy’ which landed her top 20. She later sang singles that included; ‘Your Old Standby,’ ‘You Lost the Sweetest Boy,’ ‘What’s Easy for Two Is So Hard for One’. She alongside Robinson also performed and recorded ‘I Want You Round’.

In 1964, she recorded and released ‘My Guy’ which hit number one on the Cashbox R&B chart. In 1965, she left Motown Record Label. She later signed a contract with 20th Century Fox Records. She then released singles such as ‘Ain’t It the Truth,’ ‘Stop Taking Me for Granted,’ ‘Use your head,’ ‘Never, Never Leave Me’. These singles didn’t succeed hence leading to her unsuccessful mission in the record label.

She later was married to Curtis with whom she had one child. In 1990, she separated from Curtis. Wells died on July 26, 1992, of laryngeal cancer. She died at the age of forty-nine.