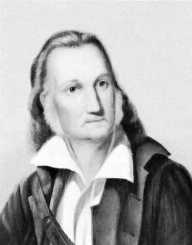 John James Audubon is well known for his artwork.  However, his work became a great gift to the field of ornithology.

However, his mother died while he was an infant.  John James Audubon returned him to Nantes, France to be raised and adopted by his stepmother.

John James Audubon loved to explore the outdoors.  He watched birds and observed animals in their surroundings. He was also very interested in the arts.  For example, he played instruments such as the flute and violin.  John James Audubon also learned how to draw.

To avoid enlistment in Napoleon's army, Audubon's father sent him to his farm in Mill Grove, Pennsylvania in 1803.  Audubon was 18 years old.  Even though his father intended on making his son a businessman, John James Audubon took more time in exploring his new surroundings.

John James Audubon would hunt, fish, and observe.  He conducted many experiments and improved his drawing skills.  Audubon also had the first-known recorded experiment regarding bird banding.  Through his observations, he determined that birds returned to their nesting sites year after year. Some of these experiments he did with his neighbor, Lucy.  They would eventually marry.

John James Audubon went into business to prove to Lucy's father that he could support her and a family.  With pioneers and settlers traveling west, he set up a dry goods store in Louisville, Kentucky.

John James Audubon later established a store in Henderson, Kentucky.  While he did alright, he had his struggles.  For example, during the War of 1812, there were conflicts regarding British trade. Also, John James Audubon found that he could still support his family through hunting and fishing just as well as working in the store.  The biggest problem came in the financial Panic of 1819.  By then Audubon lost everything and was jailed for outstanding debt.

John James Audubon developed some skills in his adult life.  One of them was taxidermy.  After he quit the business, he went to work as a taxidermist in Cincinnati. It was then that he was determined to draw and paint all of the birds in North America.

The drawing was always a hobby for John James Audubon, but now it would provide for him.  In 1820, he started his travels.  He paid his way by selling some of his artwork or painting portraits for people along the way.  He also taught painting from time to time.

By 1824, John James Audubon was ready to print his first book from the portfolio he created over the course of his journeys.  It was recommended that he go to England to find a publisher.  He toured England as the “American Woodsman” and raised money while he looked for a publisher.

John James Audubon found one in London who started filling the subscription orders of Birds of America.  As soon as that was taken care of, he started on Ornithological Biographies with Scottish ornithologist William MacGillivray.  Not only did he write the history of each species, but his sons also helped with the bird drawings.  The sale of his book allowed for him to live out his life a wealthy man.

John James Audubon started Viviparous Quadruped of North America, but poor health meant that his son John Woodhouse Audubon would take over the work.  His son followed in his footsteps as a naturalist and painter.

John James Audubon met Lucy Bakewell while in Mill Grove. They married in 1808 and had four children. Two of those children died early in childhood. Lucy put in her effort to support her family while she encouraged her husband's quest. She was trained as a teacher, so she could teach from home or work with the children at plantations.

While the talent and work of John James Audubon contributed to ornithology, he is recognized for setting a high bar that no one else has been able to duplicate or exceed after him. The National Audubon Society was not created by him, but it was named in honor of his work and toward the conservation of the natural habitats of birds.