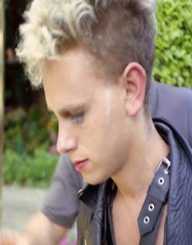 British musician Martin Gore was born in Essex, England on the 23 July 1961. He has two half-sisters: Karen (b.1967) and Jacqueline (b.1968). He was raised by his mother and stepfather. Growing up, he believed that his stepfather was his biological father. Later in life, he discovered that he was fathered by an African-American GI whom his mother met when he was serving in the US Army in Britain.

Martin Gore was a pupil at Nicholas Comprehensive School, in Basildon, Essex, England.

After leaving school, Martin Gore worked in a bank and in his free time played in an acoustic duo, Norman and the Worms (1978-1979) with school friend Phil Burdett. In March 1980, he founded a band named Composition of Sound with friends Vincent Clarke and Andy Fletcher. Gore played keyboards, Clare did vocals and played the guitar and Fletcher was on bass. They changed the band’s name Depeche Mode in 1981 and released their first album the same year, Speak & Spell (1981). Clarke left the bank in 1981 and Gore began writing most of the music and lyrics. Depeche Mode’s follow-up album, A Broken Frame was released in 1982.