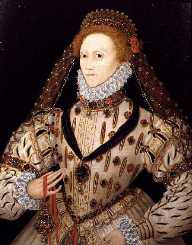 From an unfortunate princess imprisoned by her own half-sister, Elizabeth I became a queen admired by all of England, and the greatest ruler England ever saw. She was the last ruler of the Tudor dynasty.

Her rule is widely regarded as prosperous & peaceful. She ruled England for 44 years with a strong will (known as The Elizabethan Era) and took the country to the glory not seen before.

Queen Elizabeth I was born on September 7, 1533, at Greenwich Palace. She was the daughter of King Henry VIII and his second wife Anne Boleyn. The majority of the King’s court did not recognise the marriage and considered her an illegitimate child. By evil conspiracy, her mother Anne was executed, to make room for King Henry’s third marriage.

The ageing king got an heir from his third marriage. Until then, Elizabeth was seen preferred over her elder half-sister Mary. This did not go well with Mary, who would later have her imprisoned. King Henry had four more marriages after Boleyn, and his last wife Katharine Parr devoted herself to Elizabeth’s care.

Being a princess, Elizabeth I received the best education in England, from some of the world’s most skilful teachers. As was the custom for Princesses, most of her training focused on languages. She was quite adept in French, Flemish, Italian, Spanish, Greek, and of course English. Soon, she became one of the most educated women in England.

After King Henry’s death, Elizabeth I went to live with Katherine Parr, who married Thomas Seymour. Her half-brother Edward sat on the crown. Seymour was a plotting individual who subjected Elizabeth to physical abuse. This experience scarred Elizabeth and made her averse to romantic love. After Parr died, Seymour tried to marry Elizabeth but was convicted of plotting and executed.

King Edward died soon, and both Mary & Elizabeth were candidates to the throne. However, Edward willed Lady Jane to be crowned. Eventually, it was Mary who became the Queen of England. A die-hard Catholic, Queen Mary had religious policies and decided to marry the Catholic Prince Philip of Spain. This caused massive unrest among her subjects.

Elizabeth’s woes continued for she was denied basic liberties, and was kept house imprisoned under suspicion of her support to the Wyatt Rebellion due to her protestant views. Mary mellowed down towards Elizabeth in her later years, and in 1558 her rule came to an end with her death. Elizabeth was now the heir to be crowned.

As the Queen of England

Elizabeth I was crowned the Queen of England in 1558. She was given a corrupt & bankrupt country, torn by the religious policies of Mary I. She also faced several assassination threats with others such as Mary, Queen of Scots laying claims to the throne. Elizabeth first started with the Act of Supremacy, re-establishing the Church and thus following the path of a truce between Catholicism & the protestant faith.

Elizabeth I ruled with an ironwill, suppressing threats either by treaty or by force. Her accomplishments include the treaty of Edinburgh, the Netherlands Expansion, the crushing defeat of the Spanish Armada & diplomatic relations with the Ottoman Empire & Barbary States. Although she was criticised at times for being irresponsible like on the issue of her marriage, Elizabeth was a devoted monarch.

She displayed great character in ruling her kingdom, making her 44-year reign one of the most prosperous and peaceful times in England. Culture flourished during her reign in England. Artists like William Shakespeare and Christopher Marlowe produced literary masterpieces. English theatre also reached its peak during her rule. In the later years of her government, her popularity declined sharply.

Being a witness to her father’s marriage woes, and the abuse at the hands of Seymour, Elizabeth I was not particularly fond of the idea of marriage. While she had many suitors, she liked one in particular. His name was Robert Dudley. However, under strong pressure from her council, the marriage never took place.

Eventually, Elizabeth declared herself to be married to the people of England, and to work in their service. She remained a virgin queen and after her death, the Tudor Lineage ended.

Queen Elizabeth I died on March 24, 1603, at Richmond Palace. She was interred in Westminster Abbey, in a tomb alongside her half-sister Mary. After her death, James I was crowned the King of England.