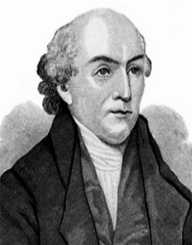 William Carey was a missionary for the British Baptist Ministry, working in India. He was famous for his work and is known as Father of Modern Missions

William Carey was born on 17 August 1761, in Paulerspury, Northamptonshire in England.

William Carey was the first child of the five, born to weavers Edmund and Elizabeth Carey. Edmund was also a parish clerk and a village schoolmaster, where the family was raised in the Church of England.

William Carey self- taught Latin and Greek, as well as many other languages, he was also interested in botany and natural sciences at school.

Due to his lack of good health, William Carey was first apprenticed to a cordwainer Clarke Nichols, at the age of fourteen.

There, he became a Dissenter, leaving the Church of England to form a small Congregational Church near Hackleton.

On the death of Clarke Nichols in 1779, William Carey worked for a shoemaker in Hackleton at the age of eighteen.

William Carey met his first wife Dorothy Plackett there, and took over the shoemaking business after the death of the owner Thomas Old. while he was trying to make ends meet, William would teach himself more languages.

In 1785, William Carey became a schoolmaster in the Moulton Village, in addition to his shoemaking career.

After becoming a Dissenter, William Carey met others like him, including John Ryland and Andrew Fuller.

William Carey was invited to preach in the church near a village called Earls Barton. John Ryland baptized him into the Baptist denomination.

In 1785, doubling his career as a schoolmaster, he was made the pastor of the Baptist Church in Moulton Village. He became a full- time pastor for Harvey Lane Baptist Church four years later.

Dismayed by his fellow Protestant’s lack of missionary interest, William Carey wrote An Enquiry into the Obligations of Christians to use Means for the Conversion of the Heathens, published in five parts during 1792.

In the same year, Particular Baptist Society for the Propagation of the Gospel Amongst the Heathen (later renamed as Baptist Missionary Society) was founded, and the first meeting was held on 2nd October.

William Carey took his family along with him to India mid-1793, supported by a medical missionary, Dr. John Thomas.

The family arrived in India Nov 1793, after Dr. Thomas found a Danish Captain who was willing to take them to Calcutta. By then, William’s fifth child was born

The Carey family’s life in India was hard; Dr. Thomas had deserted the Enterprise after the money ran out. William Carey had to work as a manager in indigo factories, while the family had to learn the Bengali language.

The family regularly moved, settling temporarily in Midnapore, where William translated and wrote Bengali New Testament with the help of a pundit.

His son Peter was killed by dysentery and stress, causing wife Dorothy to suffer from a nervous breakdown and she died soon after in 1807.

A wave of new missionaries arrived in India, and due to the hostile treatment of British East India Company, the new arrivals were forced to settle in the Danish colony of Frederiksnagar (Serampore).

William Carey and his family joined in 1800, as the Danes permitted him to preach legally.

In December 1800, William Carey baptized his first convert, Krishna Pal. In 1801, he published the complete translation of Bengali New Testament, setting the foundation for the study of modern Bengali.

While working as a Professor of Bengali in Fort William, he would consult his colleagues to correct his language and work.

Soon William Carey was writing grammar books of Bengali and Sanskrit, as well as a new Bible in the Sanskrit language. He continued to translate the Bible into forty- four other languages and dialects.

After the death of Andrew Fuller in 1815, the new secretary, John Dyer was trying to reorganize the Society and its financial details.

Frequently at odds with the John Dyer, William Carey left the missionary society, moving into the college grounds after that.

In 1818, he and the American Baptists founded Serampore College, offering to educate local ministers for the church, as well as arts and sciences.

William Carey also founded the Agri Horticultural Society of India, to fuel his passion in botany. The King of Denmark later awarded a royal charter in 1827, allowing it to grant degrees, the first in Asia.

With the help of the Governor- General, William Carey did many cultural reforms. In particular, he stopped the practices of infant sacrifices and widow burning (sati or suttee), where widows immolate themselves on the fires of their husband’s pyre.

With the help of his team, William Carey printed books, dictionaries, classical literature and prints that served to educate.

In 1781, he married Dorothy Plackett in Piddington. Dorothy gave him seven children, while both girls died young.

Peter died at the age of five due to dysentery, while Dorothy died in 1807. His colleague remarked that William’s children were undisciplined and uneducated due to neglect from the parents.

William Carey then married Charlotte Rumor, who was Danish in 1808. She was involved with his missionary work until her death in 1821. William married a widow Grace Hughes in 1823.

William Carey passed away on a couch in Serampore, India on 9th of June 1834. The sofa is now in exhibition at Regent’s Park College, the Baptist hall of the University of Oxford.