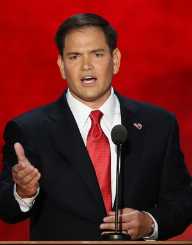 Also Known For : US Senator from Florida

Marco Antonio Rubio is an U. S. Attorney, Politician, a Senator and former Speaker of the Florida House of Representatives. He married Jeanette Dousdebes in 1998 at the Church of Little Flower, Coral Gables. She is a former bank teller and Miami Dolphins Cheerleader. They have four children. He ran as a Presidential candidate for the 2016 elections but withdrew his candidacy March 15, 2016. He is affiliated with the Republican Party.

Marco Rubio was born on 28th May, 1971 in Miami, Florida to Marco Rubio and Oria Garcia who were Cuban Immigrants. They had left Cuba in 1956 before Fidel Castro’s rise to power. His father was a bartender and his mother worked shifts in retail shops and hotels. His parents weren’t U.S citizens when Marco was born. They became citizens in 1975. His parents were hard working, honest folks who worked hard to provide for Marco and his siblings - Mario, the eldest, Barbara, Marco’s middle older sister and Veronica the youngest.

Marco attended South Miami Senior High school where he graduated in 1989, he then went to Tarkio College, Missouri in 1989 on a football scholarship but he stayed for just one year before moving to Santa Fe Community College, Gainsville, Florida. He got a B.A in Political Science from the University of Florida in 1993. He then went to the University of Miami School of Law in 1996.

Marco Rubio is Roman Catholic but from age 8 to 11, his family attended The Church of Jesus Christ of the Latter Days Saints. He previously attended Christ Fellowship, West Kendall, Florida which is a Southern Baptist Church. However, presently, he attends the Church of Little Flower, Coral Gables, Florida.

In 1998, Marco Rubio was elected as City Commissioner for West Miami with 744 votes. The demographic was mostly the Cuban working class community of about 6000. Marco was frequently known to play the role of peacemaker when there was a disagreement in thecommission.

In 2006, Marco Rubio became Speaker of the House and he served as Speaker until 2008. He spent a collective amount of about nine years in the House of Representatives. He is the first Cuban American to be Speaker of the Florida House of Representatives. In 2005, he encouraged the other members of the House to write 100 innovative ideas for Florida’s future. He spent time travelling around Florida meeting with citizens and gathering ideas and information and by 2006, it was published.

Marco was able to ensure that many of those ideas were implemented as about twenty-four of the ideas became laws while about ten were implemented partially. After his stint in the House of Representatives, he opened a law firm and he also started lecturing in Florida International University where he is an adjunct professor.

Marco Rubio got elected into the Senate in 2010 where he chairs several committees, including and not limited to Human Rights and Global Women Issues and Civilian Security.

He announced his Presidential intentions in April 2015, and withdrew his candidacy March 2016 after he lost the primaries in Florida to Trump. He went back to Campaign into the Senate and he won.

Marco Rubio has written three books. His first book is called 100 Innovative ideas for Florida’s future published by Regnery Publishing in 2006. After that, he wrote American Son: A Memoir 2012. His third book is called American Dreams: Restoring Economic Opportunities for everyone 2015.

Marco Rubio belongs to the Republican Party and holds firmly to many of its ideals. He supports the balancing of the federal budget. He is a strong pro life campaigner. He doesn’t believe human activity highly affects climate change. He is in support of repealing Obamacare and replacing it with fewer regulation and tax credits.