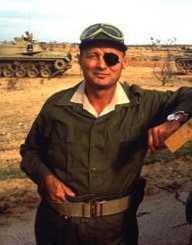 Moshe Dayan was a leader of Israel. He was a military leader as well as a minister of defense and foreign affairs during the 1950s, 1960s, and 1970s.

Moshe Dayan was born on May 20, 1915, in Degania Alef. It was then part of Palestine of the Ottoman Empire. His parents Shmuel and Devorah were Jewish immigrants from Ukraine. The family later moved to Nahalal in northern Israel.

When Moshe Dayan was fourteen years old, he enlisted in the Haganah or Jewish military. Moshe Dayan rose in the ranks to be the commander of the Palestine Supernumerary Police in 1938. Some of his duties included Special Night Squads operations. Moshe Dayan was also an instructor for leader courses. However, at one venue, British Palestine police officers found illegal weapons at the site. Those who were attending the courses were arrested, but released in 1941. With World War II going on, Moshe Dayan found work for his military background. Moshe Dayan was part of the task force of the Australian-Palmach-Arab reconnaissance. Their focus was on an Allied invasion of neighboring Syria and Lebanon. While in battle in 1941, Moshe Dayan lost his left eye.

Moshe Dayan returned to active duty. He recruited agents in 1947 for the Haganah. He worked for peace against looting. As commander of the Jordan Valley sector, Moshe Dayan protected his region from Syrian advancement. Moshe Dayan continued to rise in the ranks and oversea larger commands. By 1948 he was the Military Commander of all Jewish areas of Jerusalem. As Major-General in 1949 controlling the Southern Command, Moshe Dayan was part of the armistice talks with Jordan.

In 1951, Moshe Dayan went to a British Army Senior Officers' School in England for a course. This only continued his momentum to achieve the rank of chief of operations at General Headquarters. Moshe Dayan was part of the canal construction from the River Jordan. In 1953 he was the Chief of Staff of the armed forces. When the Suez Crisis occurred in 1956, Dayan was the commander of the forces in Israel at the time.

Moshe Dayan retired from active military duty in 1958. He took the time to advise on military concerns and write. From 1959 to 1964, Moshe Dayan was the minister of agriculture under Prime Minister David Ben-Gurion. His military experience helped him become appointed as the minister of defense. Under his leadership, he designed the plan for the Six-Day War. The results increased the size of the country by annexing Sinai, Gaza Strip, the West Bank, and Golan Heights.

Moshe Dayan resigned in 1973 but was appointed a foreign minister of Israel in 1977. He was part of the peace treaty between Israel and Egypt.

After his retirement as foreign minister, he founded Telem, the political party. It is an acronym for Movement for National Renewal. It was founded in 1981 and Dayan was one of the two seats won in that year's election. The party dissolved in 1983 to merge into the Movement for the Renewal of Social Zionism.

Moshe Dayan married Ruth Schwartz in 1935. The couple had three children. Ruth divorced him in 1971 on the grounds of his affairs. In 1973, he married Rachel who remained with him until his death

Moshe Dayan lost his left eye in battle in 1941. He wore an eye patch ever since.

In 1980, Moshe Dayan was dealing with some health issues. He was diagnosed with colon cancer. It was a heart attack that ended his life.

Moshe Dayan was criticized for not being prepared for the Yom Kipper War in 1973. He resigned from his role as minister of defense and stayed away from politics for a few years.