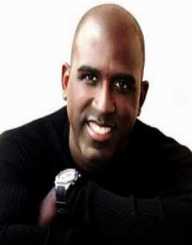 Singer and songwriter Marc Nelson was born on the 23 January 1971 in Philadelphia, Pennsylvania. His mother was the singer Phyllis Nelson.

Marc Nelson won a place at the Philadelphia High School for the Creative and Performing Arts.

In his freshman year, Marc Nelson and Nathan Morris founded Unique Attraction. They were joined by fellow students Shawn Stockman, Michael McCary, and Wanya Morris. They later changed the band’s name to Boyz II Men. Nelson left the group before the release of Boyz II Men’s first album, Cooleyhighharmony and went on to pursue a solo career as a singer and songwriter.

Marc Nelson's debut album was I Want You (1991) which included Treat Her Right, Step to Me, It’s My World. Holiday and Summer Love. He had a hit with the title song, Marvin Gaye’s I Want You.  After he had relocated to Los Angeles, Nelson did studio work with writer-producer Babyface Edmonds on Perri Reid’s album Straight From the Heart. This project brought attention to Nelson as a songwriter and producer, and he went on to do a lot of session work with Babyface.

Marc Nelson then went on to found Blayze with Tony Grant, Gary Jenkins, and Terrell Phillips. They recorded but the songs were not released, and they disbanded in 2007. Nelson then rejoined Az Yet. In addition to songwriter and producing making his music, Nelson is part of a consortium of lyricists who formed Lyric Masters 911. They have written and produced for artists such as Toni Braxton, Babyface, Brandy, Kevon Edmonds, Keith Washington, Freddie Jackson, Charlie Wilson, and Aaron Neville.

Marc Nelson has appeared on stage in Las Vegas with Boyz II Men. In 2017, he founded the production company Focused Artist Entertainment, and he released a single Wishing You The Worst (2017). As an actor, he also toured with the stage play I Can’t Make You Love Me (2017).

In 1997, at the 40th Annual Grammy Awards, Marc Nelson received an award nomination for the single Hard to Say I’m Sorry. In January 2007, the SESAC, at their Jazz Awards Luncheon, honoured Nelson for the song he wrote for Brian Culbertson, It’s On Tonight as part of their recognition of jazz writers who had whose work achieved Top Five status during 2006.   Nelson was nominated for an Emmy Award for writing the theme song for the  2016 Christmas television film, Snowy Day.