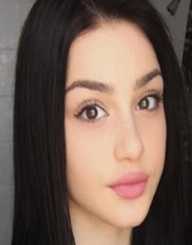 The inception of Social media has provided enormous opportunities for up and coming talents to display what they have to the rest of the world. That apart, it has made talent hunt much easier than before. Just as Justin Biber caught the attention of Usher through YouTube, much and much talents are coming into the limelight through platforms like Vine, Twitter, Instagram, Facebook and many others. Each day, a new star is outdoor on these sites while others have made a career out of these sites by posting videos for like. Just like others, Maci Pope also took advantage of social media and has since become famous on Musically.ly, a video social network site. She has about 1.4 million followers on the site that follow her posting making her famous muser. She was initially in a group of musers known as muserquag alongside Ryan Smith.

Maci Pope is also on Snapchat where over 30000 view her daily stories, Instagram with over 185,000 followers and on Twitter with 540,000 followers. She also has a YouTube account but not frequent there as the other sites.

Maci Pope was born on September 24, 2001, in Terre Haute, Indiana, United States. Aside from her prominence on social media, nothing is known about her family, education and childhood life. However, it is known that she grew with her best friend Justin Wescott and the two have been close pals since seventh grade. The two also explored social media at the same time and had helped themselves with postings and making videos. Maci Pope is currently single even though she once dated someone named Garret during her high school education.

Maci Pope started her social media thing on Instagram before being introduced to Musically.ly by another girl who knew how to use the site. The girl used to post her Musically.ly videos on Instagram, which attracted Maci Pope, hence decided to take a tutorial from her. She later created an account and started posting her own video and gradually won the heart of fans to follow her for more video updates. The rest is just history as she has gained huge followers on the site. Though she created her Instagram account before Musically.ly, her followers on the latter exceed every other account. Maci Pope is doing impressively well on Musically.ly with the way she composes herself, and how eloquently she expresses herself well in her video.

The 15-year-old Maci Pope will get you stuck to her once you watch her video. She also gives tutorials on Musically.ly to fans who request for it. However, the young chap gets pissed when people presume her to be old and keeps asking for her age. With the number of followers at this young age, Maci Pope is a star in the making.