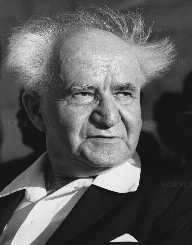 Israel’s first prime minister David Ben-Gurion was born David Gruen in Plonsk, Poland. He was the son of Victor Gruen, who was one of the leaders of the Lovers of Zion movement. The movement focused on the idea of oppressed Jews returning to their original homeland of Israel. The idea took hold in the boy’s mind, and when he was 20 years old, he travelled to Palestine.

In 1906, David Ben-Gurion immigrated to Palestine where he worked as an agricultural labourer as well as a watchman in the settlements of Petah Tikvah and Rishon Letzion. He got involved with the socialist Zionist Poalei Tzion party and soon got involved in the leadership. Around this time he began publishing under the name Ben-Gurion focusing on the need for settlement of the land and how Hebrew was the expression of Zionism.

When World War I broke out (1914-1918), David Ben-Gurion initially called for loyalty towards the ruling Ottoman Empire but changed his stance. The Turkish governors of Palestine were suspicious of him and had him arrested. He was subsequently exiled from the Ottoman Empire. Ben-Gurion then went to the United States. When the British Government published the Balfour Declaration on the 2 November 1917, which called for a national home in Palestine for Jews, Ben-Gurion joined the Jewish Legion of the British Army.

He joined to participate in the war effort in the Middle East to liberate Palestine. By the time the Jewish Legion arrived, the Turks had been defeated and the mandate over Palestine to create a Jewish national home was beginning to be put into place.

Post World War I David Ben-Gurion went back to Palestine and was immediately active in the Yishuv. He founded a political party Ahdut ha-Avodah, an early version of the Labor party and the Histadrut Labor Federation in 1920. The Federation was focused on Zionism, and Ben-Gurion believed that Zionism and socialism went hand in hand.

His idea of Jewish nationalism was economic self-sufficiency. He advocated the use of controlled violence against the right-wing strike-breakers and the denial of immigration certificates to members of the Revisionist movement. Then in the 1930s, he backed away from violence and proposed an agreement between the Histadrut and Revisionist workers. He was elected chairman of the Zionist Executive as well as the head of the Jewish Agency.

The Jewish settlement caused concern among the Palestinian Arabs and violence broke out between the two communities. In 1939, Britain decided to restrict Jewish immigration to the Middle East which meant fewer immigrants arriving in Palestine. Ben-Gurion called on the Jewish community to oppose these measures. He called a conference of American Zionists in New York City (May 1942) which called for a Jewish commonwealth to be established in Palestine after the war.

Once World War II (1939-1945) was over, David Ben-Gurion led the Jewish community against the British Mandate and in May 1948, the UN General Assembly voted to establish the State of Israel. Ben Gurion subsequently became the first prime minister of Israel as well as the Minister of Defence. He organised a strong national army and hostilities ceased, but Arba leaders would not enter into peace negotiations with Israel.

Historically David Ben-Gurion saw the establishment of Israel as another chapter in Jewish history, following on from when Hebrew freedom fighters had been defeated by the Roman legions which resulted in Jews exile from Palestine. He focused on mass Jewish immigration, a public education system, the settlement of desert lands and active military. Ben-Gurion was in office until he retired in 1953, returning in 1955.

Around this time the U.S.S.R. was providing the Arab states with arms and Israel found an ally in France who were engaged in the Algerian war, supplied Israel with weapons. In 1956, Israel took occupation of the Sinai Peninsula and only withdrew when given freedom of the Strait of Tiran and peace with Egypt, supervised by the UN. Ben-Gurion remained in office until 1963.

When in the United States in 1917, David Ben-Gurion met Russian born nurse Paula Munweis, and they got married in the New York City town hall shortly before he left to joins the Jewish Legion. They had three children, Geula, Amos, and Renana. Ben-Gurion published Letters to Paula and the Children in 1958. David Ben-Gurion died on the 1 December 1973 in Tel Aviv, Israel at the age of 87.