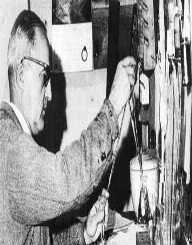 Louis Federico Leloir was born on September 6, 1906, in Argentina. In 1906, his parents traveled to Paris to treat his father’s illness. However, a week after Luis was born, his father died. Leloir’s mother Hortensia returned to Buenos Aires in 1908, where they lived together with his eight other siblings on their extensive property El Tuyu.

As a child, Leloir had a big interest in natural phenomena. In school, he paid a lot of attention to biology and other natural sciences. He got his primary education from Escuela General San Martin, secondary education from ColegioLacordaire and afterward went to study a few months at the Beaumont College in England. He began studying architecture in Paris at the Ecole Polytechnique. In 1920, he came up with the idea of golf sauce, a combination of ketchup and mayonnaise.

After his time in Europe, Leloir returned to Buenos Aires and joined the Department of Medicine at the University of Buenos Aires. The beginning of his career was not easy since he required to take the anatomy exam four times. In 1932, he finally received his diploma and began his medical residency at the Hospital de Clinicas. He had several arguments with his colleges about how he was treating his patients. Leloir decided to devote himself to research since he believed there was little he could do to help his patients.

A major turning point in his career came in 1933 when Leloir met Bernardo Houssay. Houssay inspired Leloir to investigate suprarenal glands and carbohydrate metabolism as his doctoral thesis. Leloir and Housay developed a very close relationship and collaborated on many projects until Houssay’s death in 1971.
Initial research

For his doctoral thesis, Leloir received recognition from the University of Buenos Aires. He felt like he was lacking knowledge in physics, mathematics, chemistry, and biology and decided to attend classes as a part-time student. In 1936, Leloir enrolled at the University of Cambridge, where he studied under Sir Frederick Gowland Hopkins. At Cambridge, Leloir mainly researched enzymes and effects of cyanide and pyrophosphate on succinic dehydrogenase. He began specializing in his main topic, carbohydrate metabolism. In 1937, Leloir returned to Buenos Aires. In 1943, he married Amelia Zuberbuhler, with whom he had a daughter.

In Buenos Aires, things did not go well for Leloir. Houssay had been expelled from the University for his political activities, and Leloir decided to flee to the United States. There he obtained the position of associate professor at the Pharmacology department at Washington University in St. Louis. He returned to Buenos Aires in 1945 and began working at the Instituto de InvestigacionesBioguimicas de la FundacionCompomar. The institute was initially composed of just five rooms, a bathroom, and a central hall. During the next five years, Leloir’s experimental success revealed the chemical origins of sugar synthesis in years and the oxidation of fatty acids in the liver. By 1947, Leloir had formed a team with several scientists and discovered the connection between angiotensin and hypertension.

In 1948, Leloir and his team of researchers discovered the sugar nucleotides which were the fundamental basis of the carbohydrate metabolism. This discovery turned the institute into a world-renowned biochemical institution. His team also embarked on studying glycoproteins and discovered the primary mechanisms of galactose metabolism, also determining the cause of galactosemia.

In 1949, Leloir became the titular professor of the University of Buenos Aires Biochemical Institute. In 1957, Leloir and his team applied to the United States National Institutes of Health for funding and were accepted. The institute was donated space in a former school. Since then, the institute began gaining prominence and got more funding from the government.

In 1970, Leloir received the Nobel Prize for Chemistry for his discovery of metabolic pathways in lactose. He was the first Argentinian to receive this prize. He spent all of the $80 000 prize money on continuous research.

Leloir discontinued to work in the laboratory around the 1980s, but remained in his teaching position at the Department of Natural Sciences at the University of Buenos Aires. In 1983, he became one of the founders of the Third World Academy of Sciences.