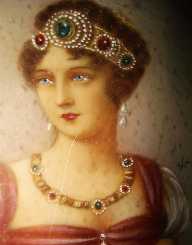 Napoleon’s first wife Joséphine de Beauharnais was born on the 23 June 1763 on the plantation Les Trois-Îlets in Martinique in the West Indies. She was the daughter of Joseph-Gaspard de Tascher and Rose-Claire des Vergers de Sannois and was born into a wealthy Creole family. Joséphine entered into an arranged marriage to the son of Francois, Vicomte de Beauharnais, Alexandre.

Joséphine has educated at the Dames de-la-Providence a Catholic convent in Fort Royal, Martinique. (1773-1777).

In October 1770 Joséphine’s father took her to France where she entered into an arranged marriage Alexandre de Beauharnais, the son of Francois, Vicomte de Beauharnais. They were married on the 13 December 1770 in Noisy-le-Grand, France. The couple had two children: Eugene de Beauharnais (b.1781-d.1924) and Hortense de Beauharnais (1783-d.1837), but the marriage was not a success.

In 1783, believing his wife to be unfaithful, Alexander had divorced her and given her the choice of returning to Martinique or entering a convent. Joséphine decided to choose a convent and went to live in Penthémont Abbey, Paris with her two children. Joséphine lodged a complaint against her husband, and he withdrew the accusations, but the couple went ahead with a legal separation which was signed on the 5 March 1785. The terms of the divorce provided a financial settlement for his wife and children with Joséphine maintaining custody of her daughter and their son being brought up by his father after he reached the age of five.

Joséphine then moved to Fontainebleau where she lived her aunt and her father-in-law for two years. She briefly lived in Paris before returning to Martinique with her daughter. (1788-1790). Claims have been made that during this time she gave birth to another daughter, Marie Josephine Bénaguette. But historians are not in agreement as there are no records, to prove that she gave birth to Bénaguette. Joséphine and Hortense returned to Fontainebleau, and she also spent time in Paris. Her husband by that time had become Secretary of the Assemblee Nationale. In March 1794 he was arrested during the Reign of Terror and in July of that year was put to the guillotine. Joséphine was detained around the same time but once widowed was released.

Joséphine met Napoleon Bonaparte in 1795, and they were married on the 9 March 1796. Malmaison was purchased in 1799. And in January 1802, Joséphine’s daughter Hortense married Louis Bonaparte, her step-father’s brother. The couple had three children, and their son went on to become Napoleon III.

In May 1804 Bonaparte was declared Emperor of the French with his wife as Empress. Because they had married in a civil ceremony, because the coronation a religious tradition had to be undertaken, and in December 1804, the inauguration took place at Notre Dame Cathedral in Paris, France. In July 1805 Napoleon was crowned King of Italy in Milan. Her son married Princess Augusta of Bavaria in January 1806 and in June 1806, her daughter was crowned Queen of Holland.

Joséphine’s grand-daughter Josephine was born in March 1807. She was the daughter of her son Eugene and Princess Augusta. This grandchild went on to be a queen of Sweden. In 1807, her grandchild by her daughter Hortense, Prince Napoleon-Charles of Holland died. Hortense had another son, Louis-Napoleon, born April 1808. This child became Napoleon III.

In 1809 Napoleon told Joséphine that their marriage was over. She had failed to convince a child, and he was intent on securing an heir. Joséphine had been unable to conceive a child and as Napoleon wanted an heir and their marriage was dissolved. He went on to marry Marie Louise, the daughter of Emperor Francis 1 of Austria of the House of Habsburg in March 1810.

Joséphine moved to the Chateau de Navarre, fifty km from Paris and spent her remaining years living between there and Malmaison. In April 1811 Napoleon visited Joséphine at Malmaison before leaving for the French Campaign, and that was the last time she saw him. She died at Malmaison on the 29 May 1814.