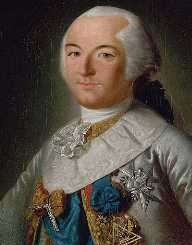 Before his ascending to the throne, Louis XVIII of France went into exile during the French Revolution from 1791 to 1814. His reign was interrupted by the return of Napoleon I from Elba in what came to be the Hundred Days. With this development, he went into exile in the United Kingdom, Prussia and Russia, but returned after the Sixth Coalition defeated Napoleon.

He received his education first from a governess, Madame de Marsan who was the Governess of the Children of France. At age seven, his education was taken over by Antoine de Quelen de Stuer de Caussade who was the Duke of La Vauguyonand completed in April 1771. After his education, his extravagant independent household was established. He was conferred as the Count of Maine, Count of Provence and several others. Louis XVIII of France was ordained the Grand Master of the Order of St Lazarus on  December 17,1773. After the death of King Louis XV,Louis Stanislas brother, Louis Auguste succeeded him and became King Louis XVI.

During the France Revolution in which was mainly caused by the introduction of tax reforms, the Third Estate declared itself a National Assembly and contested the reformson  June17,1789. They subsequent metamorphosed to the National Constituent Assemblywith the aim to give France a Constitution. There were also series of rioting across Paris, which also led to the Storming of the Bastille. Some of the royal family left the country to seek refuge elsewhere, but King Louis XVI remained. The rioting became uncontrollable and after The Women’s March on Versailles on October 5,1789, they were forced to leave the palace of Versailles to Paris.

Louis XVIII of France  also lived in the Luxembourg Palace during the rioting and later left into exile where he declared himself as de facto regent of France relying on a document signed by King Louis to making him the regency in the case of his death. While in exile,  Louis XVIII of France  began tosolicit for funds and soldiers to invade France. The information got the France, which angered the Legislative Assembly, declared all royals in exile traitors in January 1792, and subsequently seized their properties. The National Convention also abolished the monarchy system in France on September 21, 1792, and four months later King XVI was executed. His son, Louis Charles was to succeed him was also deemed too young since he was 10 years then but was however declared King Louis XVII of France by the royal family in exile. This made Louis Stanislas also declared himself the regent for his nephew, Charles.

Louis Charles also died in prison and now Stanislas was declared King Louis XVIII on June161795and came out with The Declaration of Verona. However, after the invasion of the Republic Venice byNapoleon Bonaparte in 1796, Louis XVIII of France  left Verona for Blankenburg in the Duchy of Brunswick but left after the death of Frederick William II of Prussia

Louis XVIII of France was then offered to stay in the Jelgava Palace in CourlandbyTsar Paul I ofRussia in 1798. After three years stay in Russia, Tsar Paul asked Louis XVIII to leave Russia in January 1801. The family later sought refuge in Prussian but had to use pseudonyms to avoid identification. They lived in the Lazienki Palace in Warsaw 1801 to 1804. In France Napoleon declared himself as the emperor inMay 1804after Louis XVIII of France  failed to force Louis XVIII to relinquish his right to the throne of France in 1803. The family later had to leave Warsaw to Russia after Alexander I son of Paul I invited them back to Russia to leave in Jelgava. With this, they had to move to England, where they lived in Gosfield Hall in1807.

After a failed invasion of Russia by Napoleon, his in 1812,  Louis XVIII of France  issued a declaration to France, while leaving in Hartwell in 1813assuring the people of restoring all their confiscated lands and not victimising those who served under Napoleon. On March 31, 1814, allied troops entered Paris and Napoleon was forced to abdicate the throne on April 11 same year when his senategave the Bourbons their right to the throne.

Louis XVIII of France  returned from exile to Paris on May 3, 1814, where he took a procession through the city to display himself to the people.  Louis XVIII of France  overruled the senate constitution at the time and instituted the Charter of 1814. The new charter came with a freedom of religion, a legislature made of Chamber of Deputies and Chamber of Peers among several other freedoms. However,  Louis XVIII of France  also failed on some of his promises including a failure to cut taxes on tobacco, and salt leading to the Bordeaux riot.

Louis XVIII of France  once again had to leave into exile in the United Kingdom of the Netherlands after Napoleon escaped from prison in Elba and led about 1,000 troops on February26, 1815.  Louis XVIII of France  had underestimated the strength of Napoleon’s army, however, some of the armies of Bourbon who were loyal to Napoleon defected making his army strong. Nonetheless, the battle of Waterloo onJune18with the help of allies help secured the country from being invaded again monarchy was restored. Louis then returned to France from exile.

After he was restored to his position, Louis XVIII of France  almost remained a dormant leader and a council he had instituted took most decisions. He dealt with officials who were allegiance to Napoleon byprosecuting some of them. He was however against shedding blood of such officials and the atrocities that were meted on them by the people.

Louis XVIII of France  was married to Princess Maria Giusepinna of Savoyon May 14, 1771.  Known in France as Marie Josephine was the daughter of the Duke of Savoy, Victor Amadeus. The two according to sources never had a good marriage life due to Maria’s poor personal hygiene. The couple has no children. All the pregnancies that resulted from their marriage ended up with a miscarriage. King Louis also got obese and could hardly walk. His obesity also resulted in health conditions including gout and gangrene. He died on September 16, 1824, becoming the last French monarch.