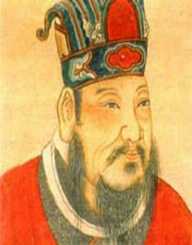 Wudi was the most influential emperor of the Han dynasty. His over fifty years of leadership made him the longest reigning monarch.

Wudi was born in 156 BC in Changan, the capital of the Chinese Empire. His parents were Emperor Jing and Wang Zhi. His grandparents were Emperor Wen and Empress Dowager. He was given the name Liu Che. Wudi was bestowed to him after his death. It means The Martial Emperor.

Prince Liu Che was not the direct heir apparent to the throne. He was the tenth male child of the emperor. As time went by he became his father’s favorite. Through the machinations of the royal counselors and emperor’s resolve, Liu Che was declared the crown prince. In 153 BC he was given the official title the Prince of Jiaodong. Then four years later in 149 BC.

Prince Liu Che ascended to the throne upon his father’s death in 141 BC. He adopted the official title of Emperor Wu of the Han dynasty. The emperor was barely fifteen years. The Han Dynasty thrived on a traditional Taoist ideology. This type of governance provided for political and economic devolution. The system of governance made China an economically stable empire but the central government was prone to political strife. Most of the powerful regional administrators rebelled against the seemingly passive emperors.

Emperor Wu broke away from tradition. He was fascinated by the teachings of Confucius. He deeply consulted with the Confucian scholars and sought to revolutionaries the Chinese Empire. His only obstacle was the influential figure of Empress Dowager, his grandmother. Empress dowager died in 135 BC. Emperor got his chance to rearrange the socio-economic and political landscape of the Chinese.

The transformation of the Chinese empire was spearheaded by the laws known as the Jianyuan Reforms. All the traditional fiefdoms were revoked and the regions put under the direct command of the Imperial Palace. The noble heads in China were now direct subjects of the emperor. No one was born into nobility. Instead, it was the emperor who bestowed a nobility title.

The central government in Changan nationalized all the major industries in the empire. The trade of precious commodities was also under direct control of the central command. The emperor had all the powers to impose and review taxes at will.

As part of his ambitious plan to make China great again, Emperor Wu changed the foreign policy of non-interference to aggressive conquest. In 133 BC, he attacked the Xiongnu people to the north of the empire. The war was fought for years until he conquered them in 89 BC. The last fragments of the nomadic Xiongnu warriors were scattered across the Gobi desert. They were no longer a threat to the northern Chinese border. Though the Xiongnu people scattered in 127 BC, it was until 89 BC that they were totally defeated by the Han army

He then attacked the tribal kingdoms of the south. The southern part of China, the north and south regions of Vietnam were annexed into the Han dynasty kingdom. In 128 BC Korea which had rebelled and declared itself autonomous from the Han was conquered back into China.

The Han army then directed its machinery to the west. Emperor Wu went as far as the Caucus region of Uzbekistan in Central Europe. His ambition was to secure the Silk Road. This was a lucrative trade route from Europe to the East, mainly China, Japan, and Korea. The income from the trading gave the Han Empire the much-needed revenue to expand its army.

The Decline Of Emperor Wu

His military activities in Asia and central Europe took a lot of resources. The subjects of the Chinese empire had to deal with heavy taxation and high handedness of the Emperor’s officials. Regular fights broke out between the aristocrats and the royal family. Emperor Wu started to purge the rebellion from within. He executed a number of high ranking officials. Empress Wei and her son committed suicide after a botched revolt against the throne.

His tight grip on power was being decimated by his royal house. Emperor Wu chose the youngest son Zhaodi to be his heir apparent replacing his son who had killed himself. Emperor Wu died in 87 BC.

Emperor Wu officiated built the first national university in China. His reign brought China closer to Europe through trade and diplomatic relations. During his reign, Confucianism became the official religion.