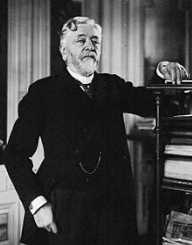 Gustave Eiffel was fondly referred to by many people as the “magician of the iron.” He was a French engineer and architect and joined a railway bridge construction company upon the completion of his tertiary education. He later became the director of the construction company he’s working with before establishing his. He established his company, Eiffel & Cie and was associatedwith many great bridges. Some of the works he got associated with include the Garabit Viaduct for the railwork network in France among others. His expertise was not a limited one as he was able to work and make a mark in United States, Spain, Brazil, among others. His work as at the then was considered to be the highest bridge in France.

Gustave Eiffel was so much involved in the construction as well as designs of several buildings and structures which include the Cathedral of San Pedro de Tacna, Grand Hotel Traian, and Catedral de Santa Maria. Many of his works are so much notable in the United States as he was known there for his design of the metallic structure of the Statue of Liberty. Upon his retirement, he got himself into meteorology and aerodynamics where he gains knowledge to push forward in life.

Born on the 15th day of December 1832, Gustave Eiffel was born into the family of Alexandre Bonickhausen and Catherine-Melanie as BOnikhausen dit Eiffel. He was known to have adopted the name Eiffel because he came from the region around the Eiffel Mountains. His father was known to be an ex-military who served as an administrator in the French Army. His mother, on the other hand, was into the charcoal business that was her family trade.

Gustave Eiffel often spends most of his time with his granny because his mother was a workaholic. He schooled at Lycee Royal where he earned a Baccalaureate in Science and humanity. He later joined the College Sainte-Barbe to prepare himself for the engineering colleges examination. He excelled the exams and got enrolled at Ecole Centrale des Arts et Manufactures where he was regarded one of the top twenty graduands of Chemistry in 1855.

Upon his completion of the school, Gustave Eiffel went on a streak of doing an unpaid job for several months to help his brother-in-law. Later, he got a job with Charles Nepveu as his secretary. Unfortunately, Nepveu’s company went bankrupt, but during that period, Nepveu trusted a lot of things including the design work for a bridge for Saint Germaine railway. Gustave Eiffel then became the department research head for his factory. By 1857, he was given a job to work as metalwork assemble which he managed before Nepveu’s resign in 1860. It was after this that he got a job as the Chief Engineer of Compagnie Belge de Materiels de Chemin de Fer but later resigned in 1865 upon the decline of the company’s business.

The resignation paved the way for him as he started working independently after this and got involved in the construction of Toulouse and Agen. Around 1866, Gustave Eiffel won a contract for the supervision of locomotives for the Egyptian government. Upon this contract, his reputation as an architect and civil engineer increased. He started getting more projects until he established his workshop in 1866. He built an all-metal church in San Marcos, Arica, Chile. There, he transported all materials to be used to the site to be assembled there. In the early October 1868, he formed Eiffel et Ciealongside with Theophile Seyrig and this company won a lot of several important projects. By 1879, he terminated his partnership deed with Theophile and thereby rechristened the company as Compagnie des Etablissement Eiffel.

Notably, he was known for his work on Garabit Viaduct which was the highest bridge in the world. Later on, he designed the Statue of Liberty after the sudden death of Eugene Viollet-Le-Duc who was the original engineer.

By 1886, he had won several contracts to design different statute, bridges among others. His design dome was highly noted for being the largest of its kind as well as its movable feature at that period. His most notable work which is also considered as a work of art today by the critics is known to be a tourist attraction in Paris. It is named the Eiffel Tower. He retired from engineering and started his work in Aerodynamics in full in the year 1912.

Gustave Eiffel is most famous for his iconic and world famous Eiffel Tower and was given the Samuel P Langley Award.

Gustave Eiffel married Marie Gaudet on July 8, 1862, and had with her five children. The marriage however ended in 1887 after she caught pneumonia. He never married until he died on the 27th of December, 1923.  He was buried in Levallois-Perret Cemetary, which happened to be his family tomb.