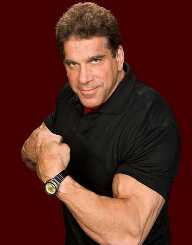 Louis Jude Ferrigno was born on November 9, 1951, in Brooklyn, New York. His father was a police lieutenant. When he was still an infant, Ferrigno suffered from a series of ear infection, which led him to lose 75-80% of his hearing. His hearing loss was only diagnosed when he was three years old. For this reason, Ferrigno was often bullied at school.

Ferrigno graduated high school in 1969. He then went on to win his first titles, becoming the IFBB Mr. America and Mr. Universe. At the beginning of his career, he lived in Columbus and often trained together with Arnold Schwarzenegger. In 1974, Ferrigno participated at the Mr. Olympia competition and won the second place. The following year he came in third. His attempt to beat Arnold Schwarzenegger was the subject of 1975 documentary Pumping Iron, which made him world famous.

His bodybuilding victories still could not provide him with living. Therefore Ferrigno was working a $ 10-hour job in a sheet metal factory in Brooklyn. The job was dangerous, and Ferrigno left when one of his co-workers accidentally cut off his hand.

Ferrigno left the competition scene for a while and played for the Toronto Argonauts in the Canadian Football League. In 1977, he competed in the first annual World’s Strongest Man competition. He was one of the eight competitors and finished as fourth. In 1992 and 1993, Ferrigno returned to the bodybuilding competitions in Mr. Olympia.

Ferrigno’s first movie appearance was as the Hulk in the 1977 movie The Incredible Hulk. He continued to play this role until 1981 together with Bill Bixby as the Hulk’s normal alter ego. The two later starred in three The Incredible Hulk TV movies. In 1983, Ferrigno appeared in the medical drama Trauma Center.

Ferrigno made a guest appearance as himself on the CBS sitcom The King of Queens from 2000 until 2007. He continued to play the Hulk in the 2003 film and as the voice in 2008 film.

Ferrigno was a personal trainer for Michael Jackson since the early 1990s. He has his line of fitness equipment- Ferrigno Fitness. Ferrigno has also appeared on the TV show Sonny with a Chance as himself and voiced Billy the Hero in the animated series Adventure Time.

In 2006, Ferrigno became a sheriff’s deputy in Los Angeles County, California. In 2010, he was sworn in as a member of Maricopa County, Arizona as volunteer sheriff posse. In 2012, he became a reserve deputy o the San Louis Obispo County and the following year, as a special deputy to the Delaware County, Ohio. He was also a contestant on the NBC television series The Celebrity Apprentice. He used the TV show to raise money for his charity, The Muscular Dystrophy Association.

Due to his partial hearing loss, Ferrigno has used a hearing aid since he was five years old. He has said that this impairment greatly helped to shape who he is now, despite the difficulties he has to experience as a child.

In 1978, Ferrigno married Susan Groff, but the couple divorced a year later. In 1980, he married Carla Green. She was a physiotherapist and became Ferrigno’s manager. The couple has three children.