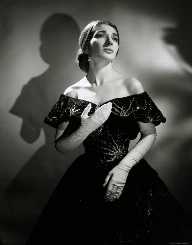 Maria Callas was a Greek-American opera singer she is known as one of the most influential opera singers of all time, and her performances earned her the nickname, La Divina.

Maria Callas was born Sophia Kalos in New York on 2 December 1923. Callas’ parents, George Kalogeropoulos and EvangeliaDimitriadou, were Greek and moved to America just before Callas was born. Callas had an older sister Yakinthi. A brother, Vassilis, was died of meningitis in 1922. Callas father opened a pharmacy in New York. Callas began singing at age three, and her mother pushed her greatly to perform. In 1937, Callas and her sister were brought back to Greece by her mother leaving their father in New York. Callas was trained as a singer in Athens. Maria Trivella trained her at the Greek National Conservatoire. After two years Callas was moved to the prestigious Athens Conservatoire, and she studied under Elvira de Hidalgo.

Maria Callas made her professional debut at the Greek National Opera in 1941. Callas quickly gained a reputation amongst critics for her powerful voice. Even fellow singers who were hostile to Callas’ success quickly began to see her talent as potentially a divine gift. Nazi Germany occupied Greece during the 1940s and Callas attracted praise from Friedrich Herzog, the German opera critic. After the end of the Second World War, Callas left Greece for America; she had appeared in seven operas in Greece. Callas turned down some roles in America as they were all for English roles and she did not feel the suited language opera. Instead, Callas was hired to perform La Gioconda in Verona Italy.

Callas worked with Tullio Serafin in Italy and was mentored by the great singer. Callas gained huge acclaim in 1949 when she performed as Brunnhilde in Wagner’s Die Walkure and Elvira in I puritan in the same season. She performed both roles in Venice, and the huge divergence between the two characters demonstrated her great range as a performer. Many critics declared the ability to hold both roles concurrently as a miracle. Callas was able to become familiar with a role after a single reading of a script and showed great talent for taking on major roles with only days’ worth of notice. Despite her success, Callas was blocked from starring at Italy’s most prestigious opera house in Milan due to a personal dislike the manager held. It was only in 1951 when Callas had become the biggest opera star did the manager relent.

Callas made her debut at the Teatro Alla Scala in Verdi’s I vesprisiciliani. Callas was also an inspiration and a supporter of some singers and directors in Italy. She arranged Italian tenor Franco Corelli’s debut in Milan and would perform with him throughout her career. Callas also performed in Argentina during the European season recess of 1949. She performed at the Teatro Colon in Buenos Aires under the direction of Tullio Serafin. Callas made her British Royal Opera House in 1952.

Callas made her belated American debut in Chicago in 1954. Callas performed Norma, in Chicago and this launched the Lyric Opera of Chicago opera company. Callas enjoyed huge success in America performing mainly in New York for the American Opera Society and the Metropolitan Opera. Callas loved performing in London, and it was the Royal Opera House in London where she made her final theatrical performance in 1965. She continued to perform recitals around the world, but her once great voice was severely worn. Callas ended her singing career in 1974.

Callas struggled with her weight she was five foot eight inches in height (174 cm) and weighed around two hundred pounds (91 kg) for most of her career. In 1953, she lost eighty pounds (36 kg) which led to her being described as the most beautiful woman on stage. It was suspected though that her weight loss led to increased difficulty in maintaining her voice. The problematic roles Callas had performed as a youth combined with her weight loss saw her struggle with her voice towards the end of her career. It was later revealed in a health report that Callas was suffering from dermatomyositis a disease that weakens muscle tissue. The disease meant it was difficult for Callas to maintain the correct posture for extended lengths of time needed to control her breath while performing.

Callas was continuously portrayed in the media as a temperamental woman, and her relationship with her mother was continually brought up. Callas did not enjoy a good relationship with her mother who was overbearing and pushy when Callas was young. Time Magazine in America ran a story about Callas and her mother before Callas’ New York debut in 1956. From the late fifties, Callas developed a reputation for walking out on performances; this was due to her health forcing her to cancel some high profile shows. Callas was also alleged to have had a rivalry with fellow singer, Renata Tebaldi. The rivalry was deemed to have largely been a media construct as multiple quotes exist of the two singers being appreciative of each other’s talents.

Callas married Giovanni Battista Meneghini in 1949. Meneghini was an industrialist, but he managed Callas’ career in Italy. The two separated in 1959 and Callas renounced her American citizenship in 1966 which legally dissolved her marriage. Callas had begun an affair with the Greek billionaire Aristotle Onassis in 1957. The affair became much publicised and was shrouded in rumor. It was alleged that they had a son together who died soon after his birth. This is contrary to Callas’ first husband’s claim that she could not bear a child. Onassis married Jackie Kennedy in 1968 but continued an affair with Callas until his death in 1975. Callas herself would die in Paris on 16 September 1977 of a heart attack. Callas was cremated and her ashes scattered in the Aegean Sea.