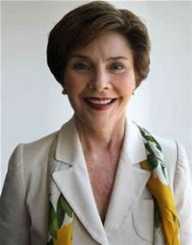 The Bush family is one of the political lions of the American democracy that has been so recognized over the last two decades. They have made a name for themselves that cannot be overlooked. Laura Bush became a part of this oil-rich and political family by marriage.

Laura Bush was born in the Texan town of Midland and her Father, Harold Welch was a real estate developer. Her mother was a bookkeeper for her husband’s business. She was born on 4th November in the year, 1946.

When Laura was a teenager in 1963, she accidentally jumped a traffic signal and hit another car. The driver of the car died as a result of the accident. For years, the incident affected her psychology profoundly. She was not charged as it was an accident.

Laura Bush finished her Masters’ Degree in Library Science from the University of Texas in 1973. Subsequently, she was able to work at the Houston Public Library. In the next year, she went to work at the Austin Independent School District.

Laura Lane Welch Bush, commonly known as Laura Bush. She is the wife of the 43rd U.S. President George W. Bush. Laura was the First Lady of the United States of America from 2001 – 2009. She grew up in a traditional household that placed importance on reading and education. It was a religious and educated business-class family.

Laura attended the University of Texas. She worked as a teacher and librarian for many years. In the late 70’s she married George W. Bush and the event changed her life forever. Consequently, she was unexpectedly brought to the public attention.

Laura Bush met George Walker Bush at a barbeque that was hosted by mutual friends during a visit back to Midland in 1977. George W. Bush was the owner of fledging oil business. He is the son of George H.W. Bush, a career politician and former Director of CIA. There was an instant attraction between the two.

At that time, he was considering running a congressional seat. On her acceptance of Bush’s proposal, she gave a condition that she would never be asked to deliver a political speech. Later on, however, she yielded and publicly supported her husband. At that time, it was an unsuccessful bid for office.

Bush went back to his oil business after his defeat. Laura became a housewife. However, in 1980, she returned to politics to help her father-in-law, George H.W. Bush’s presidential campaign.

As a First Lady, Laura Bush was supposed to make a difference to the country. In the beginning, she was hesitant about making her life public. With her high status, she gradually started working towards some causes that were close to her heart.

She worked with the development of children and spreading literacy and awareness that concerned women’s health like breast cancer, etc.

George W. Bush once again was motivated to go back to politics in 1995. He ran for Texas Governorship. He won the election. Laura was put into the public arena as the state’s first lady. Initially, she was not a keen speaker. Laura Bush gradually fostered her confidence. She started to take advantage of her elevated position.

Laura supported some worthy causes and projects that she thought vital for the community.  She successfully lobbied for the state funding of early Childhood development, reading and literacy programs. She raised nearly one million dollars for public libraries. She also championed breast cancer awareness campaign.

Laura Bush actively supported her husband when he began his campaign for the U.S. presidency in 2000. She appeared at rallies during the campaign and trying to stay clear of controversy. At the 2000 Republican National Convention in Philadelphia, Laura delivered her first major national speech. Bush went on to win. It was the closest presidential race in American history against Al Gore, his Democratic opponent.

Even though, Laura wanted to keep a low profile as the first lady. The events of the country made that not possible to achieve. Laura joined her husband in comforting the nation during the September 11, 2001, terrorist attacks. The U.S. has tied up their attention on the Bush Administration because of the disaster.

Consequently after the attacks, Laura Bush addressed parents’ anxiety and fear over how the event affected their children. Often she spoke about ways parents could comfort their families traumatized by the incident.

Laura Bush continued to support the causes for better education. On her first term as the first lady, she promoted education, childhood development, and teacher training. She testified in January 2002 before the Senate Committee on Education.

Laura called for higher teachers’ salaries and better training for Head Start programs. She founded a national initiative to promote reading at an early age called “Ready to Read*Ready to learn.” Furthermore, she lobbied to keep on the work on saving America’s national treasures. She also reinforced the “Preserve America campaign.”

Laura significantly raised her public role as the first lady during the 2004 White House race. She delivered a major policy speech at the Republican National Convention. Later in the campaign, she presented the significant policy accomplishments and goals of the Bush Administration. Usually, such statements were delivered by office holders and political supporters.

On the second term of the Bush administration, Laura Bush enlarged her activities. She championed the initiatives in health, literacy and gender equality. She traveled to Afghanistan to promote a new teacher-training institute for Afghan women. She spoke about the link between education and fostering democracy at the World Economic forum in 2005.

Laura intensively supported women’s health throughout the final years of George W. Bush second term. The Laura W. Bush Institute for Women’s Health was founded in 2007 at Texas Tech University. She continuously traveled around the country speaking about the importance of early detection of heart disease. In 2007, she went to the Middle East in an attempt to improve America’s image. She emphasizes the concern on women’s health and furthering breast cancer awareness.

Life after the White House

Laura Bush had supported and initiated many worthy projects. Her most important ones are considered to be the causes she worked for as a First Lady. She advocated on issues related to children, women’s health, gender equality and endorsed literacy throughout the nation.

She helped to promote HIV/AIDS awareness campaign and malaria on her five goodwill trips to Africa. She established the Laura Bush Foundation for America's Libraries and grants awards to US schools annually worth more than $1,000,000.

There are four learning facilities named after her including the Laura Bush Education Center at Camp Bondsteel, a U.S. military base in Kosovo, and the Laura Bush Middle School in Lubbock, Texas.

Laura met George Bush in 1977 and Bush proposed to Laura within three months of their meeting. The next year, the Laura and George Bush were blessed with twin girls, Jenna and Barbara. They were named after their grandmothers.

As the time went on, Laura Bush began to peacefully but faithfully build a family. She is a tremendous and positive influence in his husband’s life. She encouraged her husband to have a religious experience.