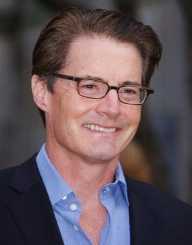 Kyle MacLachlan was born on February 22, 1959, in Yakima, Washington, USA.

As a young adult, Kyle MacLachlan attended the University of Washington. He would later graduate from this school in 1982 with a bachelor’s degree.

Kyle MacLachlan’s acting career began in the mid-1980’s. His first role was as the character Paul Atreides in Dune in 1984. He was picked for this film because David Lynch thought he had talent. He would later go on to act in other David Lynch films. He would go on to act in several other movies before the end of the decade, including Blue Velvet, Dream Breakers, and The Boyfriend School.

Kyle MacLachlan began his television acting career in 1990 as Special Agent Dale Cooper on the cult television show Twin Peaks. While this show only lasted from 1990-1991, it gained a major following, making this one of MacLachlan’s most famous roles to date. This would be the only major television show he would act on in the 1990’s. However, he continued to act in films. Some of the famous films he was in include The Doors, Showgirls, and Mad Dog Time.

In the 2000’s, Kyle MacLachlan returned to working on television. In 2000, he took on the role of Trey MacDougal on Sex and the City. He would also later have recurring roles in the television shows In Justice and Desperate Housewives (as Orson Hodge). His roles in Sex and the City and Desperate Housewives would be his most famous roles of this decade. Meanwhile, he was also in some films, including Northfork, Touch of Pink, and The Smell of Success.

As of the 2010’s, Kyle MacLachlan continues to act in both television and film, but more so television than film. In 2010, he began playing The Captain on the cult television show How to Met Your Mother. He continued to play this role until 2014. In 2012, he also had a recurring role on the show Made in Jersey as the character Donovan Stark. Some of the other famous shows he has had major recurring role sin include Believe, The Good Wife, Agents of S.H.I.E.L.D., Twin Peaks, and Portlandia. Out of these, his role on Portlandia was his most famous. Also in this decade, he voiced the father in the animated film Inside Out.

Over the course of his long career, Kyle MacLachlan has only won a handful of awards but has also been nominated for more than a dozen others. Some of his most impressive awards are listed below.

Kyle MacLachlan married Desiree Gruber in 2002. This couple has one son together: Callum MacLachlan.