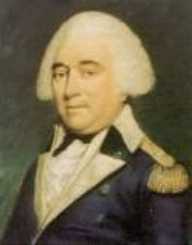 Anthony Wayne was a United States Army Officer and politician. Born on January 1, 1745, he gained the nickname Mad Anthony, due to his adventurous nature and military campaigns.

Wayne, who commenced his military career during the American Revolutionary War, quickly earned a promotion to the rank of brigadier general and would later command the Legion of the United States as a Senior Officer of the Army. Wayne started a career as a tanner and surveyor.

He was elected to the Pennsylvania General Assembly, contributing to raising the Pennsylvania militia in1775. Wayne participated in various campaigns during the war. After the war, he briefly served as Georgia representative in the United States House of Representatives. He later returned to the army as a commander of the Northwest Indian War. Anthony Wayne died in active duty in 1796.

Anthony Wayne was born on January 1, 1745, in Easttown Township, Chest County in Pennsylvania to Elizabeth Iddings and Isaac Wayne. He received education in surveying at his uncle’s academy and later at the College of Philadelphia, without a degree.

Anthony Wayne was involved in several military campaigns during the American Revolution. He started helping raise a militia in 1775 and a year later became a colonel of the 4th Pennsylvania Regiment. His regiment participated in the unsuccessful invasion of Canada by the Continental Army. However, due to his contribution at the Battle of Trois-Rivières, he earned a promotion to brigadier general on February 21, 1777.

He led his forces in the Battle of Monmouth in 1778, but the highly numbered British force thwarted his war effort and had to be relieved by reinforcement sent by Washington. Wayne led the Light Infantry in July 1779 to attack British positions in the Battle of Stony Point, and the success of it boosted the morale of the army. He was awarded a medal of victory. He led several other campaigns and was promoted to major general on October 10, 1783.

After the American Revolution War, Anthony Wayne returned to Pennsylvania, where he was elected to serve for one year in the state’s legislature in 1784. He later moved to Georgia, where he had been granted a tract of land for his service in the military. While there, he was selected as one of the state’s delegates for the rectification of the United States Constitution in 1788.

Anthony Wayne was elected as Georgia’s1st congressional district Representative to the Second US States Congress in 1791. However, it was determined that electoral fraud occurred during the 1790 election leading to the cancellation of the election and Wayne lost his seat over residency qualification.

Anthony Wayne returned to military service to lead an expedition in the Northwest Indian War, upon a call by President George Washington. He was made the commander of the newly formed Legion of the United States.

He ordered the construction of the Fort Recovery that serves as the base for the operation. He successfully launched an attack on the Indian confederacy during the Battle of Fallen Timbers in Maumee, Ohio. His successful negotiations with the tribal confederacy led to the signing of the Treaty of Greenville on August 3, 1795.

In 1766, Anthony Wayne married Mary Penrose. They had two children, daughter Margretta and Isaac Wayne. He died on December 15, 1796, of complication from gout while returning to Pennsylvania from a military post in Detroit. Wayne was interred at Fort Presque Isle. In 1809, his son Isaac Wayne exhumed his body for reburial on a family plot at St David’s Episcopal Church.

According to legend saying, most of his bones were lost along the roadway of US Route 322, leading to his ghost wandering the highway every January 1, in search of his lost bones.