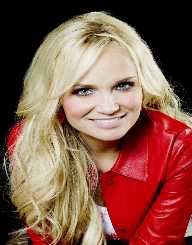 American singer and actress Kristin Chenoweth was born on the 24 July 1968 and adopted by Jerry Morris Chenoweth and Junie Smith Chenoweth. She grew up in Tulsa, Oklahoma. She has some Cherokee ancestry. Musical from a young age, Chenoweth used to sing gospel music in church.

Chenoweth attended Broken Arrow Senior High School and after graduation enrolled at Oklahoma City University where she obtained a BA in musical theatre (1990) and followed that up with a master’s degree in opera performance (1992). She also had voice training with Florence Birdwell.

Kristin Chenoweth appeared in various beauty pageants and was a runner-up in the Miss Oklahoma pageant in 1991. While still studying she started performing in theatre including a role in the Sound of Music. She auditioned at the Metropolitan Operation National Council and won a scholarship. During a visit to New York, she was offered the role of Arabella Rittenhouse in Animal Crackers at the Paper Mill Playhouse. She then decided to decline the scholarship and move to New York to pursue her career.

Initially, Kristin Chenoweth focused on musical theatre. In 1997 she appeared on Broadway in Steel Pier. She played the role of Precious McGuire, an ambitious dancer seeking the fame. Chenoweth won a Theater World Award for her performance. In 1999, she was in the Gershwin musical Strike Up The Band at the Lincoln Center. Her next Broadway performance was in You’re A Good Man, Charlie Brown playing the role of Sally Brown.

After her success in the theatre world, television offers started to arrive, and in 2001, Kristin Chenoweth featured in an NBC sitcom entitled Kristin. Thirteen episodes of the show were filmed, but only six were aired before the show was axed. In 2003,  Chenoweth was back on Broadway in Wicked starring as Glinda. After twelve months in Wicked, Chenoweth moved to LA to take up a role in The West Wing. During 2006 she starred in The Apple Tree on Broadway as well as working in television and film.

Chenoweth tours and performances met with sold-out capacity crowds around the world. She has performed at both the Royal Albert Hall and Carnegie Hall.

Kristin Chenoweth has won a number of nominations and awards. One of her first awards for a Tony Award for You’re A Good Man, Charlie Brown (1999). In 2009 she won an Emmy for best-supporting actress in a comedy series for Pushing Daisies. She earned a Tony nomination for Glinda the Good Witch for Wicked (2004) and was nominated for two Emmy Awards and a People’s Choice Award for her performance in Glee. For her performance in 2015 in On the Twentieth Century, she won a Drama Desk Award, Outer Critics Award, and a Broadway.com Audience Choice Award.

The Broken Arrow Performing Arts Center in her home state of Oklahoma has named a theatre The Kristin Chenoweth Theatre in recognition of her achievements.

In 2015, Chenoweth was given a star on the Hollywood Walk of Fame

Chenoweth has described herself as a liberal Christian.

Kristin Chenoweth has Meniere’s Disease, an inner-ear problem.
She received a head injury the set of The Good Wife, a comedy series in which she had a recurring role.