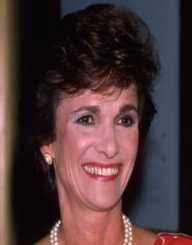 Kitty Dukakis is an American author, social worker and former first lady of the US state of Massachusetts.

Kitty Dukakis was born as Katherine Dickson to Harry and Jane Dickson on December 26, 1936, in Cambridge Massachusetts. She grew up in Cambridge being very close to her father. She disliked her mother for her strictness. In 1955, she left her studies and got married to John Chaffetz at the age of 19 years. The couple had a son Jason. Jason later served as a Congressman from Utah. They stayed together for four years. She returned back to college after the divorce.

She graduated from Lesley College with a Bachelor of Arts degree in 1963. She married a lawyer and politician Michael Dukakis in the late months of 1963. They had three children in their marriage, the fourth being her son with Chaffetz. Kitty Dukakis earned her Master of Arts degree in 1982 from Boston University.

Dukakis settled into the rigorous life of a political wife. The couple looked like a mismatch at first. Michael was a Greek Orthodox, well reserved and mannered. Kitty, on the other hand, was volatile and adventurous in nature. She supported her husband in his political ambitions despite the glaring differences in character.

In 1975 Michael Dukakis won the gubernatorial race in Massachusetts. Kitty Dukakis became the wife of a prominent Democratic insider. Her husband lost his seat in 1978. She returned as the governor’s wife after the 1982 elections.

As the State first lady, she returned back to college for her Master’s degree. On community service, she helped her husband by establishing projects within the state. Dukakis helped build shelters for the homeless. She worked in the rehabilitation of drug addicts, and the protection of children against physical and mental exploitation. Her major project was the organization now called Hope Found. It helped rehabilitate the homeless and secured then sustainable income.

On the campaign trail, Kitty Dukakis charmed the electorate with her eloquence. She was a gifted orator who resonated well with the public. She advocated for the elevation of the underserved in society. Dukakis forged vicious advocacy for the homeless, illiterate, single mothers, and the inner city children. She was noted for her elegance and style in her fashion wear.

Dukakis was the perfect choice for the first lady in waiting. On the outside, she was vibrant, well educated, articulate and intelligent. She understood the needs of the low-income earners having come from the same class. Her announcement about her battle with addiction shocked her supporters. Dukakis narrated her longtime dependence on diet pills. She overcame her addiction in 1982 after 26 years of struggling.

She slipped back into addiction after the presidential loss of her husband. Kitty Dukakis became an alcoholic to cope with the political realities of the loss. Her situation worsened when she started consuming ethanol-based alcohol. She was hospitalized in 1989 for ingesting rubbing alcohol. Rubbing alcohol was the equivalent of the hospital surgical spirit. She was treated and discharged after her situation stabilized.

Even with her personal struggles with addictions, Dukakis served American society in various capacities. She was appointed as a member United States Holocaust Memorial Council. The council helped in maintaining close ties with the American Jews and the State of Israel.

She served as a board member of the Refugee Policy Group. Dukakis was on the Task Force on Cambodian Children. She served as a social worker at the International Institute of Boston. She worked with refugees and immigrants and helped them in resettling legally in the US.

In 2001 Dukakis tried a controversial treatment to overcome her depression. Electroconvulsive therapy or ECT was a new phenomenon in the medical field. She was given mild electrical shocks to redress her mind. The treatment had the possibility of damaging the brain tissues and causing amnesia. She went through the treatment and overcame her depression. She is now the most vocal advocate of electrical therapy in dealing with depression.

In recognizing her efforts in helping addicts, the Kitty Dukakis Treatment Center for Women was opened at the Lemuel Shattuck Hospital in 2007. The center deals with addictions and other kinds of mental disorders within the state of Massachusetts.

Kitty Dukakis has written books about addiction and depression. In 1990 she wrote the book titled Now You Know. She talked about her addictions. In 2006 she published Shock: the Healing Power of Electroconvulsive Therapy.

In addition to the books, she constantly writes to medical and social journals in the US. Dukakis continues to attend lectures and give interviews on various disorder issues. She devotes her time in helping others overcome their disorders by settling them in various rehabilitation centers.

Kitty Dukakis lives with her husband in their longtime matrimonial home in Brookline, Massachusetts.