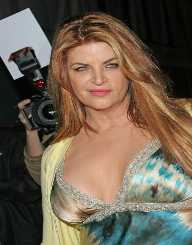 Kirstie Louise Alley is an award-winning American actress, spokesmodel, and actress. Born on January 12, 1951, she came into the limelight with her role as Lieutenant JG Saavik in Star Trek II: The Wrath of Khan. However, she is best known for the role of Rebecca in the NBC sitcom, Cheers from 1987 to 1993. For the outstanding performance, she won the Golden Globe Award for Best Actress – Television Series Musical or Comedy Series and Primetime Emmy Award for Outstanding Lead Actress in a Comedy Series in1991.

Kirstie Alley started a career as an interior designer, but her fortunes turned around after participating in the NBC game show Match Game and Password Plus.

Kirstie Alley has since starred in movies like Summer School, 1987, Deconstructing Harry, 1997 and Drop-Dead Gorgeous in 1999. Alley’s role in the American television film, David’s Mother, won her another Emmy for Outstanding Lead Actress in a Limited Series or Movie. Her versatility and diversity in acting won her the lead role in NBC’s sitcom Veronica’s Closet from 1997 to 2000. She received a nomination for Golden Globe and Emmy for her performance. She has also played a role in films like Flaked and Scream Queens.

Kirstie Louise Alley was born to Lillian Mickie and Robert Deal Alley on January 12, 1951, in Wichita, Kansas. Her mother was a housewife and her father a lumber company owner. Kirstie Alley has two other siblings Colette and Craig. She graduated from Wichita Southeast High School in 1969. Kirstie Alley continued her education at the Kansas State University that same year.

She moved to Los Angeles to pursue Scientology and became a member of the Scientology Church. In California, she was engulfed in a party lifestyle becoming a drug addict. She had to undergo Scientology-affiliated drug treatment program to overcome her addiction. In 1981, Alley lost her mother to a car accident, which left her father severely injured but recovered with time.

While in Los Angeles, Kirstie Louise Alley pursed a career as an interior decorator. In 1979, she contested in the NBC game show, Match Game. She won $500 in the first round and $5500 in the second round. The following year, she partook in the game show Password Plus. The competitions gained Kirstie Louise Alley a place in the movie industry.

In 1982, she made a movie debut playing the role of Vulcan Starfleet officerLieutenant Saavik in Star Trek II: The Wrath of Khan. The movie was a box office hit grossing $ 98 million. However, she refused to reprise her role in the next two sequels for less pay. Kirstie Alley then played minor roles in films like One More Chance, Runaway and Blind Date. Alley starred in the comedy film Summer School, alongside Mark Harmon in 1987. The film was a commercial success grossing over $35 million at the box office.

That same year, Kirstie Alley replaced Shelley Long in the NBC sitcom Cheers. She will play the role until the show ends. In 1991, she won an Emmy Award for Outstanding Lead Actress in a Comedy Series and Golden Globe Award for Best Actress – Television Series Musical or Comedy Series and Primetime for her role in Cheers. Alley starred alongside John Travolta in another box office hit film Look Who’s talking in 1989. The film grossed about $295 million globally.

In 1994, Kirstie Alley won her second Emmy award for the role in David’s Mother. In 1995, she was honored with a motion pictures star on the Hollywood Walk of Fame at 700 Hollywood Boulevard.

News broke of Alley’s participating in Dancing with the Stars in February 2011. Her professional partner for the competition was Maksim Chmerkovskiy. They finished at the second place, with NFL Super Bowl champion Hines Ward taking the first place. He once again competed in the 15 season of the competition with partner Maksim Chmerkovskiy. This time they were the seventh couple to be eliminated.

Kirstie Louise Alley has married twice. Her first marriage was to long-term boyfriend, Bob Alley in 1970. The two had dated since high school. The couple divorced after seven years of marriage. On December 22, 1983, she married Parker Stevenson and had two children, William Truce and Lillie Price. They divorced in 1997 but shared the custody of their children. She became a grandmother on June 21, 2016, after William welcomed his son Waylon Tripp Parker. She is a member of the Church of Scientology, and as of 2007, she was at the OT VII level.

On September 17, 2012, Kirstie Alley was on The Dr. Oz Show admitting she has gained much weight to her obsessive eating habit. Give according to her got her into early menopause in 1992. From 2004 to 2007, she was able to lose about 75 pounds to bring her weight to 145 pounds. Alley was at the time working with Jenny Craig as a spokesperson. However, she gained about 83 more weight after quitting her job with Craig.

In 2010, Kirsti e Louise Alley founded Organic Liaison, a company that deals with weight loss products. In 2011, Kirstie Louise Alley claimed she had lost about 100 pounds using products from her company. Her claims were found to be false, and in 2012, she was sue for putting up false advertisement.

She agreed to a $130,000 in settlement and pull down the advertisement and the term “Proven Product” from packages of the products. The Organic Liaison was later acquired by Jenny Craig’s product line.