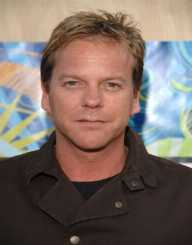 Kiefer Sutherland is a very versatile actor that has a wide knowledge of how to act and play numerous roles. He was born to acting parents who taught him most of the things he knows. He probably decided to act because of his parents. He played minor roles in movies like Max Dugan Returns and The Bad Boys. He also went ahead in playing in Three Musketeers, A few Good Men, and Eye for an Eye.

Kiefer Sutherland is also a Television actor and acted in the series, 24 as agent Jack Bauer. He earned several accolades for his role over eight seasons and got nominated for Golden Globes and Emmys. He also later became one of the executive producers of the series. He is presently a star on the Hollywood Walk of Fame.

Kiefer Sutherland was born with his twin sister, Rachel on December 21, 1966, to Donald Sutherland and Shirley Douglas who were both into the show business. His parents however divorced while he was four taking him along with her to Toronto. His mother sponsored him and enrolled him at Crescent Town Elementary School as well as John G Althouse Middle School in Toronto. He had to change schools five times and take weekend acting lessons for his acting skills.

In 1983, Kiefer Sutherland had a minor role to play in Max Dugan Returns. His father was an actor in the movie too, but he did not have any scene with him. He later starred for the first time in a Canadian film, The Bad Boy in 1984. He played the role of a very sensitive teenager who resists his mother’s attempt at making him a priest. He later acted in his first American film in 1986, Stand By Me. He played Ace Merill who was a bully. He attracted a horror-comedy, The Lost Boys. This movie was commercially successful and critically acclaimed by many. He worked with the director, Schumacher for some films later. Later on in the 1990 sci-fi thriller, Flatliners, he starred with Julia Roberts, Oliver Platt, and WIllima Baldwin.

Kiefer Sutherland kept on acting in different movies which include Twin Peeks: Fire Walk with Me before he was given a more significant role in A Few Good Man. The latter earned an Oscar nomination. Later on, he acted in an unconvincing remake of Franco-Dutch Thriller before acting in The Three Musteekers. The three Musteekers was successful commercially, but it received a downward review. He kept on acting in major movies with Joel Schumacher. He later acted in a supporting role in A time to kill. This movie was a 1996 box-office hit. Later in 2003, after a period with Schumacher, he was given a role as the mysterious caller in the movie, Phone Booth. However, he appeared for only three minutes. Kiefer has had the opportunity of acting in a sci-fi film before, and that is the Dark City.

In 2005, Kiefer Sutherland starred in the Sentinel as a secret service agent before starring as a former reporter in Touch. After a long period in the movie industry, he then chose to try a series based show too. He acted in the twelveepisodes24: Live Another Day which was aired by Fox.

His performance as Jack Bauer won him several accolades and reviews with his performance in 24. The serial is also estimated to be watched by over 11 million people. Apart from this, the 1998 Young Guns could be said to be one of his major works as he shared screen space with Emilio Estevez and Charlie Sheen.

Kiefer Sutherland has been nominated for many awards in which he only wins some and not most of it. He was nominated several times for his role in 24 but was able to win some of the awards. Some of his awards are as follows.

Kiefer Sutherland had a daughter with Camelia Kath whom he married between 1987 and 1990. He later engaged Julia Robert after he separated from Camelia. However, Julia broke the engagement over an allegation that he was dating a stripper.