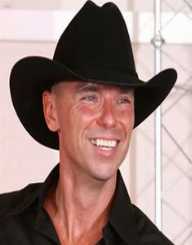 Born on March 26, 1968, Kenneth Arnold Chesney better known as Kenny Chesney is an American singer, record producer, and songwriter. The high rated singer has 20 albums to his credit. Out of these albums, 14 have Gold status according to RIAA ratings. The award-winning singer’s estimated worth according to Forbes in 2015 is $14 million. Apart from his album chalking successes, most of his singles have also made it to the top 10 on the U.S Billboard Hot Country Songs and top 40 on the Billboard Hot 100. With these, it is not surprising that he has sold over 30 million albums worldwide. Chesney talent coupled with hard work and dedication has won him several awards.  He is a proud receiver of other Academy of Country Music and Country Music Association Awards.

Kenny Chesney was born in Knoxville, Tennessee to Davis Chesney, an elementary teacher, and Karen Chandler, a hair stylist. He is the first child of his parents and has a younger sister Karen Chandler. He had his High school education at Gibbs High School and completed in 1986. He then moved to East Tennessee University, where he studied Advertising and graduated in 1990. Having a love for music, Chesney started teaching himself how to play the guitar from a Terminator guitar he received as a Christmas gift.

Kenny Chesney had a relatively young job as he released his first demo album recorded at the Classic Recording Studio in 1989. He got himself a new guitar from proceeds of about 1,000 copy sales. Though he was still in school, he found time to perform at local clubs where he sold most of his albums. After his university education, he moved from Tennessee to Nashville to continue with his usual club performances.

Chesney met Clay Bradley, the head of the writer at BMI who also introduced him to a friend at Opryland Music Group, Troy Tomlinson in 1991. He was auditioned by Troy and won a songwriter contract. He later got a contract with Capricorn Records a year on after when he showed up at a songwriters showcase. In 1994, he released his official debut album, In My Wildest Dreams under Capricorn Records.

The album realized about 10,000 sales that same year. After Capricorn had stopped its operation in Nashville, Kenny Chesney signed onto the BNA records in 1995. The signing followed by his second album All I Need to Know that same year. Two songs on the album including, Fall in Love, made it to the top ten songs.

In 1996, Kenny Chesney released his first certified Gold album You and Me. Songs on the album like When I Close My Eyes, and the title track made it to number two on the Billboard country chart. The collection also won him the New Male Vocalist of the Year award by the Academy of Country Music in 1997. Chesney never relented on his efforts and continued with the release of his fourth album, after the third, with BNA records, I Will Stand in 1997.

A single on the album She’s Got It All made it three consecutive weeks on the Billboard country charts. Kenny then released albums like; Everywhere We Went in 1999, Greatest Hits in 2000, No Shoe, No Shirt, No Problem in 2002 and All I Want for Christmas Was a Real Good Tan in 2003. In 2004, he released When The Sun Goes Down in 2004 which had the single There Goes My Life, which charted on the Billboard country chart for seven weeks. A video of the song also won Male Video of the Year award by CMT in 2004.

Others include Welcome to the Fishbowl in 2012, Life on a Rock, 2013, The Big Revival, 2014 and Cosmic Hallelujah in 2016. Chesney recognizes his fans with the name No Shoe Nation. He announced this to his supporters at the Gillette Stadium on August 25, 2013. This announcement came with the symbol of the movement being a black flag with a white skull and crossbones.

Chesney has several awards to his credit. Some of the notable awards are four entertainers of the year award by the Country Music Association (2004, 2006, 2007, and 2008). He also received New Year Vocalist of the Year in 1997, Top Male Vocalist of the Year 2002 and in 2005 he received Triple Crown Award from the Academy of Country Music Awards. Some of his videos have also won awards at the AMA and the CMT Awards.

Kenny Chesney has been married and divorced. His marriage to actress Renee Zellweger, in May 2005, lasted for only four months. The two are said to have met at a tsunami relief event. The reason for their divorce, according to his wife is a fraud; however, Chesney held a contrary view.  According to him, the only fraud, he may have committed was not knowing how and what to expect in marriage. Probably he may have underestimated what marriage entails. He has since not remarried. Chesney’s worth in a publication by Forbes in 2015 is an estimated $42 million.

Kenny Chesney has done several philanthropy works throughout his career. He works with the V Foundation aimed at finding a cure for cancer. He performs at Farm Aid on a regular basis for no fees. The act is to ensure that Family Farm is saved from foreclosure. He also did a tribute song, “Touchdown Tennessee,” in 1998 for John Warda, Former Broadcaster for St Jude Children Research Hospital, a volunteer football team for the University of Tennessee.