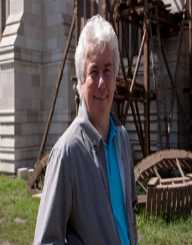 Ken Follett was born on 5th June 1949, to Martin and Lavinia Follett. He was born in Cardiff, Wales. Ken Follett is the eldest of three children. His father was a tax inspector, and his parents also belonged to the Brethren religion, and they banned the children from watching television or movies. Due to the lack of television, Ken Follett began to read, and grew to love the pastime.

When Ken Follett was 10, the family moved to London. Ken Follett began to study at Harrow Weald Grammar School, followed by Poole Technical College. In 1967, Ken Follett was awarded a scholarship into University College London. He decided to study philosophy. Follett graduated in 1970, after which time he took a course in journalism.

After his course in journalism, Ken Follett gained employment as a trainee reporter for the South Wales Echo in Cardiff. Three years later, he moved back to London and began working for the Evening News as a reporter. There was no challenge in journalism for him, so Ken Follett left reporting and moved into the publishing industry. He worked for Everest Books, a small publisher in London, and became the deputy managing director by the late 1970s.

During this period, Ken Follett turned his hand to writing novels. Although it began as a part-time hobby when Eye of the Needle was released in 1978, it became an international bestseller and he became a household name in the book world. The book went on to sell over 10 million copies. With the success of Eye of the Needle, each book Follett released after that became a best-seller. Many of them became top sellers on the New York Times Best Seller list, and several have been turned into movies or mini-series for television.

In 1989, Ken Follett released his first non-spy thriller. It was called, The Pillars of the Earth. The book has sold over 26 million copies. It was on The New York Times Best Seller list for 18 weeks, and made best-seller lists around the world. He has published over 40 books, many in the thriller/spy genres. Ken Follett has sold more than 160 million copies of his books.

Ken Follett readily promotes writing and literacy and holds various positions in the public-eye to achieve this. He is a Fellow of the Royal Society of Arts, Patron, Schools Radio, and Trustee for the National Literacy Trust. He has held several other positions apart from these.

Ken Follett has won many awards and honors, some of which include:

1979:   Awarded the Edgar Best Novel Award from the Mystery Writers of America

In 1968, Ken Follett married Mary Elson. That same year their first child, a son, was born. Their second child, a daughter, was born in 1973. The couple divorced in 1985.

In 1985, Ken Follett married Barbara Hubbard. She had three children from her previous marriage. The couple are still together at the time of writing.