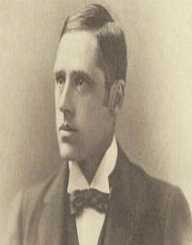 Banjo Paterson was born on February 17, 1864, in Australia. His parents were Rose (Barton) and Andrew Paterson. He also had six siblings. His father, Andrew, was also a poet. For some of his childhood, he also lived with his grandmother, Emily Barton. She too encouraged his love of poetry.

In Banjo Paterson's youth, he attended both the Binalong Bush School and the Sydney Grammar School. He was a star pupil at both schools, as his talent for writing and other subjects was obvious already. He also practiced horseback riding while in school. His time at the bush school later prompted inspiration for his poetry. After primary and secondary school, he attended law school.

Banjo Paterson’s first poem was published in 1885; It was called El Mahdi to the Australian Troops. It was printed in The Bulletin. After publishing his first work, he took some time off from publishing poetry, or anything else for that matter. He instead worked in law, as a solicitor. He did this from 1886 to 1896.

He went back to writing again in the late 1890’s. In 1899, he wrote for the Sydney Morning Herald. He wrote a guest article about the Boer War.

Banjo Paterson switched career tracks once again in the early 1900’s, as he worked with the Australian Army during the Boer War. It was not his writing, but his knowledge of horseback riding, that was his main skill used in this time.

In 1901, Banjo Paterson left Australia to travel in Europe and Asia. There, he studied journalism, as he wished for that to be the focus of his career. While on this trip, he also worked on a second book of poetry, which he published later in the same year. This work was titled Rio Grande’s Last Race and Other Verses.

Once returning to Australia, he earned a job working for the Sydney Evening News in 1903. He worked here for several years, working on both professional and creative writing at the same time. However, he did not publish more poetry during this time.

He stopped working in journalism at the beginning of World War I. He worked as both an officer and an ambulance driver for the Australian war effort. During the war, he was also promoted all of the ways to a major. Paterson worked closely with American and British troops that were stationed in Australia. He also may have traveled to Europe to fight.

When World War I was over, Banjo Paterson published a book that held several volumes of his poetry called The Collected Verse of AB Paterson. This was published in 1921. In the same year, he returned to journalism. This time he worked for the Sydney Sportsman as an editor. He worked there until 1930 when he retired.

After retiring, he strayed away from journalism and focused on more creative pursuits, like poetry and fiction-writing. Some of his most famous works are listed below.

The Man from Snowy River

Banjo Paterson was a Commander of the Order of the British Empire in 1939 for his contribution to literature.

Banjo Paterson died on February 5, 1941. The cause of his death was a heart attack. He was 76 years old when he passed away.

Decades after his death, his face appeared on an Australian stamp in 1981. His face also appears on the ten dollar bill in Australia.

The AB Paterson College is named after him.

The Banjo Paterson Writing Award is named after him.