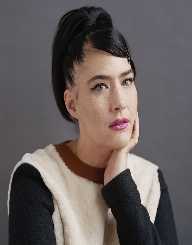 Kathleen Hanna was born in the city of Portland, Oregon, on November 12, 1968. Her family frequently moved because of her father’s changing jobs. She returned to Portland after her parents got a divorce. At the age of fifteen, she had an abortion. She was happy she made that decision. It fueled her later support for the legalization of abortion. She graduated from Lincoln High School. She then attended the Evergreen State College in Olympia, Washington.

Hanna became interested in feminism at a young age. Her mother was a volunteer in shelters for domestic violence victims. Together they read feminist literature, such as Betty Friedan’s book The Feminine Mystique. She spent the following years volunteering and giving speeches related to women’s rights.

When she was in college, Hanna set up an exhibit of photographs dealing with sexism and AIDS. The school decided to shut it down before it could be displayed. Because of this, she decided to open her own women’s art gallery, called Reko Muse. She co-founded it with two friends, Tammy Rae Carland and Heidi Arbogast. The three of them also formed a punk rock band called Amy Carter, after the daughter of President Jimmy Carter. Hanna also formed another band called Viva Knievel. They had a two-month tour across the United States and broke up quickly after.

In 1990, Hanna teamed up with bassist Kathi Wilcox, guitarist Billy Karren, and drummer Tobi Vail. Together they formed the band Bikini Kill. They soon signed with an independent record label. Over the next few years, they became quite a success. They toured both the United States and the United Kingdom. They released two full-length albums – Pussy Whipped in 1994 and Reject All American in 1996. They also recorded two EPs, one of which was a collaboration with the British band Huggy Bear. They became one of the most prominent representatives of the Riot Grrrl movement. That was a name for punk rock performers who promoted progressive radical politics such as third wave feminism. Some of their singles, such as “Rebel Girl” and “The Anti-Pleasure Dissertation” became anthems for the feminist movement.

Bikini Kill broke up eight years after forming. Hanna began working on a solo record called Julie Ruin. It covered topics such as feminism and opposing police abuse. Soon after, she formed a band called The Troublemakers with her friend Johanna Fateman. However, it lasted for a very short period of time.

A while later, Hanna and Fateman reunited. Together with filmmaker Sadie Benning, they started another band called Le Tigre. They released three albums – Le Tigre in 1999, Feminist Sweepstakes in 2001, and This Island in 2004. They explored sociopolitical topics such as the problems of the LGBT community. The style of their music was quite electronic.

Hanna had to leave Le Tigre in 2005 because of health problems. After that, she continued working on several projects. She taught an art class for a semester at New York University. She also served as a DJ at the Museum of Modern Art. In 2010, she decided to revive her old project, Julie Ruin. She created a band together with Kathi Wilcox and Kenny Melman. They released two albums – Run Fast in 2013 and Hit Reset in 2016.

Director Sini Anderson started working on a documentary on Kathleen Hanna called The Punk Singer. It was filmed from 2010 to 2013. It explored her work from Bikini Kill to The Julie Ruin.

Hanna started dating the American rapper and guitarist Adam Horovitz, known as Ad-Rock, in 1997. They got married in 2006.

Hanna suffered from Lyme disease for years. It interfered with her work, forcing her to take breaks from music and to cancel performances. She finally recovered in 2015.