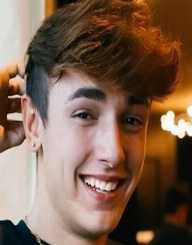 The patronage of social media platforms for the youth of today is phenomenal. The sort of talents displayed on these platforms are mind-blowing, and each day a new one is discovered. Juwany Roman falls within the above description and has taken the internet by storm. Born on July 25, 1999, Roman has gained fame with his videos on Musical.ly and YouNow accounts and has a lot of fans now. His videos consist of pranks, challenge, music videos and other contents, which are story based.

Apart from working alone, Juwany Roman has also collaborated with other famous social media personalities in his video. His relation with fans is fantastic, that makes them addicted to his videos, and that has created for his wide range of audience. Roman is also active on YouTube with his channel Flanin Geos.

Juwany Roman was born on July 25, 1999, in Bethlehem, Pennsylvania and of a Puerto Rican descent. He has a sister, Jennishka and the family currently lives in Florida. His sister is also a popular figure on Musical.ly. Roman is a fan of sporting activities and takes much interest in skateboarding. He also loves photography, fashion, and music. He has been able to keep some childhood information to himself as not all are in the public domain.

Juwany Roman may not have the looks like others but has the craft. He first showed up on social media in 2015 and from a humble beginning, he is on his way to stardom. Roman is present on social media platforms like Musical.ly, YouTube and YouNow. His creative story based videos, pranks, challenges among others have gained him many loyal fans. His videos mostly feature family and friends and portray his daily life activities and that of the family.

Juwany Roman also collaborates with other social media personalities in his content. On his YouTube channel, Flamin Goes, he has more than 383,000 subscribers and counting. Roman went on the tour Part of My Story with the twin brothers behind 99goonsquad and Mario Selman. This collaborative tour created a positive image for him and expanded his fan base.

Juwany Roman has been able to find a sweet and loving girlfriend in Loren Beech. The two lovebirds have not hidden their relationship from his fans as they flaunt on social media. He is calm in appearance, and that posture is deemed attractive to some of his followers.