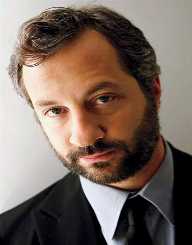 Judd Apatow is an American writer, producer, and director. He is known for raunchy comedy films such as Knocked Up and The 40-Year Old Virgin.

Judd Apatow was born on December 6, 1967, in Syosset, New York. His parents were Maury, a real estate developer, and Tami, a record label manager. He has a brother and a sister. His parents divorced when he was 12.

He was influenced by comedy clubs and stand-up comedy when he would visit his mother at her work there.

Judd Apatow attended Syosset High School. He graduated in 1985. He then went to college at the University of Southern California where he studied screenwriting at the USC School of Cinematic Arts. He dropped out after two years of study.

Judd Apatow got his first gig in comedy as the high school radio station host of “Comedy Club.” He started doing stand-up during his senior year.  When he moved to Los Angeles for college, he started “Comedy Night” events on campus.

His introduction to comedian Garry Shandling was a boost in his career. Even though he was able to write his material, he was even better-writing material for other comedians such as Roseanne Barr, Tom Arnold, and Jim Carrey.

In 1990, Judd Apatow was writing special material for the Annual Grammy Awards hosted by Shandling. He would continue to write for other awards shows as well as Shandling's The Larry Sanders Show.

He was in demand for other comedy shows and events in the 1990s. His contribution to The Ben Stiller Show earned him his first Primetime Emmy.

He was the executive producer of that series as well as other TV series including The Larry Sanders Show, Freaks and Geeks, and Undeclared.  Some of his notable productions in the 2000s included Knocked Up, Superbad, and Walk Hard: The Dewey Cox Story.

His production of the 2011 film Bridesmaids was a commercial success as was his production and writing of the HBO series Girls.

Judd Apatow continues writing, producing and directing. One of his recent projects was The Zen Diaries of Garry Shandling, a documentary about his mentor who got him started on his career. Shandling died in 2016. Apatow has been nominated for a Primetime Emmy including Outstanding Documentary or Nonfiction Special and Outstanding Directing for a Documentary/Nonfiction Program.

Judd Apatow and his wife Leslie Mann donate to numerous causes through their organization, the Apatow-Mann Foundation. They fund in areas of health, education, and the arts. Apatow is a strong supporter of literacy and the development of writing skills.

Judd Apatow along with the writing team of The Ben Stiller Show won the 1993 Primetime Emmy for Outstanding Writing in a Variety or Music Program. He was awarded the American Film Institute Award for Bridesmaids in 2011. In 2013, he won the Critics' Choice Louis XIII Genius Award from the Broadcast Film Critics Association. Judd Apatow has earned numerous nominations with writing teams for television episodes and screenplays during his career.