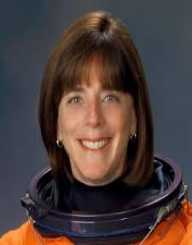 American teacher and astronaut Barbra Morgan was born Barbra Radding on the 28 November 1951 in Fresno, California.

Barbara Morgan was a pupil at Herbert Hoover High School, Fresno (1969). She enrolled at Stanford University, Palo Alto, California where she obtained a BA in Human Biology (1973).

Barbara Morgan worked at the Flathead Indian Reservation, Arlee Montana teaching elementary school maths and remedial reading (1974). She then taught at remedial reading and maths as well as the second grade at McCall-Donnelly Elementary School in McCall, Idaho (1975-1978).

Morgan then traveled to Quito, Ecuador where she taught English and science at a third-grade level at Colegio Americano de Quito (1978-1979). She then returned to McCall-Donnelly Elementary School, teaching second, third and fourth grades (1979-1998).

In July 1985, Barbara Morgan was chosen as the backup candidate for the National Aeronautics and Space Administration’s (NASA’s) Teacher in the Space programme. There were 11,000 applicants, and Morgan was runner-up to New Hampshire teacher Christina McAuliffe.

Morgan relocated to Houston and began training at NASA’s Johnson Space Center (September 1985-January 1986). The teacher she was to backup was Christa McAuliffe who died in the Challenger disaster of 1986. Morgan was later chosen as a mission specialist (1998) and did her training at the Johnson Space Center. She was selected as a mission specialist to the crew of STS-118.

It was planned that the launch would go ahead in November 2003, but because of the Columbia disaster of 2003, the crew of STS-118 was launched into space on the Endeavour space shuttle on 8 August 2007.

Barbara Morgan's role was to operate the station and shuttle’s robotic arms to install hardware on the International Space Station as well as to support spacewalk. During her time in space, she gave lessons to school children. On the 21 August 2007, the mission returned to Earth.

In 2008, Barbara Morgan retired from NASA and took up a position as an educator in residence at Boise State University in Idaho. Marcia Franklin of Idaho Public Television produced a documentary about Morgan, Barbra Morgan: No Limits. The documentary begins

Barbara Morgan is married to Clay Morgan, and they have two sons.