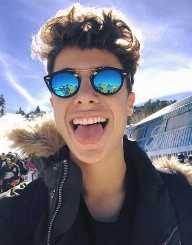 Juanpa Zurita was born on March 29, 1996, in Mexico. He also has a younger brother Andres, who is a YouTube star. Zurita does not disclose personal information on any of his social network accounts.

Juanpa began his rise to stardom in early 2013, when he posted his first video on the popular application Vine. The video, titled “That dog killed Chuck Norris and was after me” became a major hit and helped Zurita to acquire more and more followers. He began posting more humorous videos and soon became one of the most popular stars on YouTube. After becoming successful on Vine, he released his second channel JuanpaZurita 2, which gained an even bigger fan base.

Zurita has put a lot of effort into making his videos. He likes to make people laugh, and his charming and humorful nature is perfect for this job. Zurita has launched other social media accounts on Twitter and Instagram, where he has over 9 million followers. His Vine channel had more than 2 million followers. Zurita now posts videos on his YouTube channel, which has almost 5 million subscribers and has gained more than 200 million views.

The young boy is a major star in Mexico and has become the countries number one social media star. He has also collaborated on videos with other YouTube stars, like Jerome Jarre. He took his career further when in 2016, he was cast in the film Airplane Mode. The movie is about 40 social media stars who embark on a trip in a doomed aircraft. The movie is currently in post-production stage.