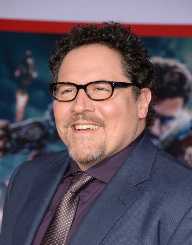 Favreau studied at The Bronx High School of Science and graduated in 1984. Favreau then went to Queens College, where he studied until 1987 and then dropped out of school. After a short stint working on Wall Street, Favreau returned to Queens College for a semester in 1988. Favreau then dropped out again permanently and moved to Chicago, where Favreau wanted to establish a career in comedy.

Jon Favreau's debut film role came while he was in Chicago. It was in the movie Rudy (1993), which became a great success.

While filming Rudy, Favreau met Vince Vaughn. The pair would go on to work on several films together. In 1994 he filmed the movie PCU and was also in an episode of Seinfeld.

Favreau moved to Los Angeles, and in 1996, acted and wrote the movie, Swingers. Vaughn was also in the movie, and it would become his first significant movie role as well. The following year he was in several episodes of the hit sitcom, Friends.

Favreau continued to act in movies over the next few years, and in 2001, he made his debut as a director with Made, which he also wrote. In 2003, Favreau directed the comedy movie, Elf, which would be his first financial success as a director.

In 2006, Favreau signed a contract which saw him take on the director’s role for the much-anticipated movie, Iron Man. The move was a huge success and established Favreau as a serious director. He also did Iron Man 2 in 2008.

Favreau has also been busy in television. He has acted or voiced for animation in 12 television series including The Sopranos (2001), The King of Queens (2004), and The Office (2013). He has also directed four episodes of different series.

In 2000, Jon Favreau married Joya Tillem, a physician. They have three children, two daughters, and a son.