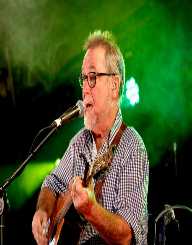 Australian country singer John Robert Williamson was born on the 1 November 1945 in Quambatook in the state of Victoria, Australia. He was raised in the Mallee District in the north-west of Victoria and was one of five brothers. Both his parents were performers, and he was exposed to country music at a young age. Williamson was playing ukulele at seven and taught himself to play the guitar by the age of twelve.

Williamson was educated at Scotch College, in Melbourne, Australia.

His family moved to Croppa Creek, New South Wales in 1965 and it was around this time that Williamson started playing in public. The first song he released Old Man Emu (1970) which was hit in Australia, reached number one and went gold. He followed up the single with an album, John Williamson.

Williamson went on to spending the next decade recording and touring. He hosted a television show Travlin’ Out West, and it was broadcast nationally.

In 1981 Williamson joined Festival Records. Around this time he was concentrating on singing authentic Australian songs, and his True Blue became one of the most iconic Australian songs. In 1985 he won his first Golden Guitar award for Queen in the Sport of Kings. Williamson won another Golden Guitar award for his album Road Thru The Heart a well as the Male Vocalist of the Year.

In 1986, True Blue was chosen for the Australian Made Campaign. His album Mallee Boy won him another Golden Guitar award in 1987, and the record went triple platinum. In another 1980s highlight, Williamson was asked to perform at the opening of the new Parliament House in the capital Canberra in 1988, and the same year Mallee Boy won the Best Selling Album award at the Country Music Awards.

In the 1990s Williamson’s success continued with three more Golden Guitar Awards. He won one award for Warragul and a Heritage Award for Drover’s Boy. The same year he released an album of children’s songs. Waratah St which in 1991 went gold and Williamson won a platinum award for Welcome to My Campfire. In 1992, he was signed by EMI Music Australia and his first album with EMI was Australia Calling: All the Best. Vol.2. His career has continued unabated throughout the 2000s, and he continues to tour and release music.