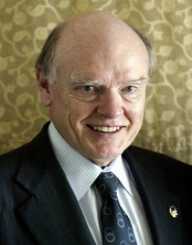 Also Known For : Former United States Secretary Of The Treasury

John William Snow is popularly known as John W Snow. He was born on August 2nd, 1939 in Toledo, Ohio. Snow has worked as the CSX Corporation’s former CEO. While the United States president George W. Bush was in power, he served as the 73rd Secretary of the Treasury.

John William Snow was born on August 2nd, in 1939. He was born to William Dean Snow, his father, and Catherine, his mother. Catherine worked as a school teacher. On the other hand, his father was a tax attorney. Snow went for his high school education at the Gilmour Academy which is situated in Gates Mills in Ohio. Soon, he went to Kenyon College before later enrolling with the University of Toledo where he graduated. With time, he went for his doctorate in Economics at the University of Michigan. After this, he spent almost three years teaching at the University of Maryland from 1965 and left in 1968. He also acquired Doctor of Jurisprudence from George Washington University Law School the previous year.

During the early 70s, John W Snow taught in the universities, but this did not disqualify him from being actively involved in other government jobs. For instance, he worked for the Department of Transportation as the Assistant General Counsel. Later on, in 1975, he officially resigned from his former teaching position at the George Washington University Law School. He went on to work in another post but under the Department of Transportation. Here he worked as the Deputy Undersecretary. In 1976 he was appointed to serve as the National Highway Traffic Safety Administration’s administrator. When Jimmy Carter took over as the 39th president of the USA, Snow abandoned his government posts and resumed teaching. He went on to teach American Enterprise Institute and the University of Virginia.

In 1977, he went on to work with Chessie System, Inc. where his experience in the transportation department proved to be of great value. He had been appointed as the V.P. that would take charge of government affairs for the organization which possessed 3 American railroads.

Three years down the line, Seaboard Coast Line Industries colluded with Chessie System, Inc. and formed CSX Corporation. As a result of this merger, Snow immediately served the post of the company’s Senior V.P.-Corporate Services. In 1985, he was appointed its CEO. The company later merged with C&O Railway which made Snow the new president and the CEO at the same time. Snow worked with CSX Corporation until his choosing to serve as the 73rd Secretary of the Treasury. He was called to serve in 2003 by the former president George W. Bush.

John W Snow lives with his wife named Carolyn. The pair has three children and that they are also grandparents to six children.