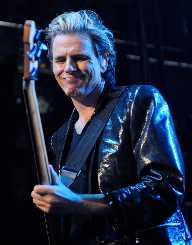 John Taylor started his first major band in 1978 with his friend Stephen Duffy and Nick Rhodes (also known as Nicholas Bates).  Later on, Roger Taylor also joined the band. A short while later, Duffy left the band, and Simon Le Bon joined. Soon after this, the band began performing in clubs, calling themselves Duran Duran, a name they have kept through decades. It wasn’t long before the band produced their first hit single, Planet Earth, in 1981. Soon after, the band released their first album, Duran Duran.

The band continued to make waves during the 1980’s. During this decade, Duran Duran worked with MTV to produce several music videos. One of the videos, for their song Hungry Like the Wolf, helped to boost their stardom. This song would go on to be one of the band’s most popular hits in the 1980’s and one of the best-remembered songs of their entire career. In 1983, the band released another album, Seven and the Ragged Tiger. Two years later, the band released another album, A View to Kill. In the late 1980’s,  Andy and (Roger) Taylor left Duran Duran. The band also released two more albums near the end of the decade, Notorious and Big Thing.

The 1990’s brought a slow to Duran Duran’s popularity, but that didn’t discourage the band from releasing several albums. In 1990, the band released Liberty. From 1993 to 1997, the band released an album every other year. These albums include Duran Duran (The Wedding Album), Thank You, and Medazzaland. These albums were not as successful as their albums from the previous decades. However, Taylor faced several personal problems during this decade, including struggles with alcohol and drugs. He went to rehab for a short time during this decade because of these problems. During his time in rehab, he also took a break from his band.

The band continued to produce albums in the 2000’s, although, at a slower rate than they had in the past. Their first album of the decade, Pop Trash, was released in 2000. However, it wasn’t until 2001 that John Taylor returned from rehab. In 2002, the band played a reunion show with all five original band members. In 2004, the band released Astronaut, and three years later, they released Red Carpet Massacre.

In 2010, the band released another new album, All You Need Is Now. Following the release of this album, the band went on a two-year-long tour. While touring, the band also released a live album. The band’s most recent album was released in 2015 and was titled Paper Gods.

Over the years, the band has also released four compilation albums, four live albums, and two remix albums. John Taylor has also played with many other bands and musicians over the years (as a bass player for a song or two), like Steve Jones and Robert Palmer.

John Taylor has written one autobiographical work: In the Pleasure Groove: Love, Death & Duran Duran. This book was written for fans of the band to learn a little more about the inner workings of the band members’ personal lives.

Over the Years, John Taylor and Duran Duran have won many awards. Some of their most prestigious awards are listed below.

John Taylor was first married to Amanda de Cadenet in 1991. This couple has one child together:  Atlanta Noo Taylor. However, this couple later divorced in 1997. He then remarried in 1999 to Gela Nash.