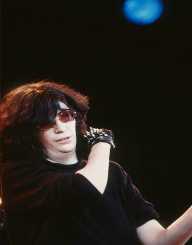 Joey Ramone was born on May 19, 1951, in Queens New York. His parent’s Charlotte and Noel also had another child. The couple later divorced, and his mother remarried. Unfortunately, she lost her second husband in a car accident. Ramone went to Forest Hills High School. At school, he was often an outcast, and when he was 18 years old, he was diagnosed with obsessive-compulsive disorder.

During his childhood, Ramone was a fan of The Beatles, the Stooges, and other bands. His biggest idol was Pete Townshend from the Who. Ramone began playing drums when he was 13 years old and played them until he was 17 and started with acoustic guitar.

Joey Ramone had excellent musical skills, and in 1972 he joined the glam pun band Sniper. The band played at the Mercer Arts Center in Kansas City. At the time, he was playing under name Jeff Starship. He left the band in 1974 and co-founded the Ramones, together with his friends John Cummings and Douglas Colvin. At the time, Colvin was known as Dee Dee Ramone and other band members soon adopted stage names using the surname Ramone. The name came from Paul McCartney’s brief stage name Paul Ramon when he played in the band Silver Beetles.

Joey first started to serve as the band's drummer, while Dee Dee was the lead vocal. The band started to receive consistent demands for performances, and Dee Dee’s vocal cords could not sustain the demands. The manager of the band, Thomas Erdelvi suggested that Joey takes over the vocal, and started to search for a new drummer. When the search brought no success, Erdelvi himself took over the drums and was later known as Tommy Ramone.

The Ramones did not achieve major commercial success. However, the band had a major influence on the punk rock movement in the United States. Only one of their records, Ramones Mania, was certified gold. The band gained its recognition in later years when they were represented in several all-time greatest rock music lists, like the Rolling Stones list and VH1 lists. The band last appeared in 1996, after finishing the tour with the Lollapalooza music festival.
Joey Ramone certainly made an impression on the music industry at the time. He had no formal vocal training, which was unorthodox at the time. His tenor range is often filled with cracks, hiccups, and snarls, which now makes him one of the most recognizable voices in punk rock.

Ramone was a member of Steven Van Zandt’s music industry activism group Artists United Against Apartheid. In 1985, the group campaigned against the Sun City resort in South Africa, and 50 artists pledged never to perform there.
He was also the headliner at the Rock the Reservation rock festival in Arizona, 1996. Ramone and his band debuted several songs, like an interpretation of Louis Armstrong’s “Wonderful World” and several other songs. Ramone’s last recording was as a backup vocal on the One Nation Under by the band Blackfire in 2002. The CD went on to win the Native American Music Awards Best Pop/Rock Album of the Year. Ramone also produced an album for Ronnie Spector- She Talked to Rainbows in 1999. The album was a critical, but not a commercial success.

Joey Ramone died on April 15, 2001. He was only 49 at the time and was suffering from lymphoma for the last seven years. After his death, in 2002 his album Don’t Worry About Me was released. To honor his name, a block of East 2nd Street in New York was named after him. He was interred at the Hillside Cemetery in New Jersey.