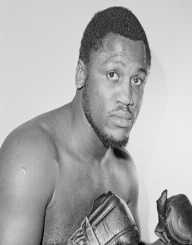 Joseph William "Joe" Frazier was born on January 12, 1944, in Laurel Bay, Beaufort, South Carolina. He was the youngest of twelve children born to Rubin and Dolly Alston-Frazier.

When he was eight, Joe Frazier was introduced to boxing when the family bought a television. After his uncle had commented that he had the body shape of then champion Joe Louis, his passion for boxing began.

As they had no equipment or gym, Joseph made his own to practice. Joe Frazier skipped school frequently and dropped out when he was fourteen.

In 1959, Joe Frazier, worked on the farm of the Bellamy family, after an incident at the farm, he was urged to leave Beaufort by his mother. To gain funds to leave his home, Joe worked at the local Coca-Cola plant, where he stayed until the government began building houses at Parris Island, and he moved on as a work crew.

In Philadelphia, Joe Frazier found work at the Cross Brothers slaughterhouse. He would practice his punches while moving hanging sides of beef into the refrigerator. His habit would later be used in boxing movie: Rocky. He decided to turn into boxing in 1961, joining the Police Athletic League Gym.

Under the guidance of Duke Dugent, the manager, and his trainer Yancey Durham, Joe Frazier won the Philadelphia Golden Gloves novice heavyweight championships three years in running from 1962. His only loss in the amateur league was to Buster Mathis.

Joe Frazier lost to Mathis during the U.S. Olympic Boxing Team decider for the 1964 games in Tokyo. He was convinced to become a sparring partner for the team, as an alternative to his rival, despite initial thoughts of quitting.

Joe Frazier, went to Olympic Training Camp in San Francisco after his employer Cross brothers agreed to hold his job.  When Mathis broke a knuckle while boxing, Joe had a spot in the Olympic games.

Joe beat Hans Huber of Germany to win a gold medal, he had damaged his left thumb before the fight and refused an X-ray. Joe won the only gold for boxing for the US.

After his gold medal win, Joe lost his job at the slaughterhouse after the surgery to fix his thumb. Joe Frazier, could not find a sponsor to help him establish a professional boxing career until a story in the local paper was published in 1964.

Joe Frazier used to pay for his professional bout by selling tickets to the fight and working as a salesman. In late 1965, Yancey Durham found a group of financial backers to form Cloverlay Inc. to fund his career and part of the agreement was that he would receive a salary that would increase when the returns did.

Joe boycotted the 1967 WBA Heavyweight Elimination Tournament. By March 1968, Joe Frazier, became the heavyweight champion, after Muhammad Ali lost the title due to his refusal to be drafted into the Vietnam war.

Joe Frazier, hired Eddie Futch as his assistant trainer, after the death of Yank Durham in 1973, the head trainer and manager.

Until 1969, Joe Frazier won all of his boxing fights, becoming the World Champion. When Muhammad Ali successfully sued for his license back, the two had their first head to head on March 8, 1971.

Joe Frazier won the fight and the title, but both men ended up in hospital after. Joe lost the title to George Foreman after a twenty-eight winning streak in 1973.

Joe Frazier lost to Muhammad Ali in the third and final head to head in the “Thrilla in Manila” in 1975. His trainer Eddie threw in the towel after fourteen rounds, where Joe suffered eye injuries.

He lost to George Foreman in 1976, after five rounds. He announced his retirement soon after. He briefly unretired In 1981, fighting Floyd "Jumbo" Cummings, but soon retired for good.

After retirement, Joe Frazier, trained his son Marvis and Jackie Frazier- Lyde. He was a special referee in NWA championships, and in a cameo for WWE and Rocky movie.

With his fame, Joe Frazier, started the Smokin’ Joe Musical Revue, singing his way in the United States and Europe. He appeared on the Dean Martin television show. Later he moved his mother to a plantation that he bought in South Carolina.

After his loss to George Foreman, he renamed his music group Smokin' Joe and the Knockouts. He also owned a restaurant and a limousine service.

Joe Frazier was inducted into the International Boxing Hall Of Fame

Joe Frazier, met Florence when he was fourteen at the farm, the two were married in 1963, after three of his children were born. Joe cut up his Olympic pieces for his eleven children.  In 1985, Joe and Florence Smith divorced. He remained with Denise Menz, his partner until his death.

In September 2011, Joe Frazier was diagnosed with liver cancer. By November he was in hospice care, where he died on 7th of November 2011.