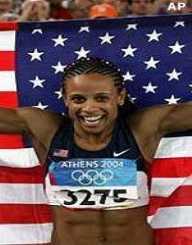 Joanna Hayes is an American athlete, and the 100 meters hurdles gold medal winner of the 2004 Summer Olympics. She was born on December 23, 1976, in Williamsport, Pennsylvania. Her original course was the 400 meters hurdles race in which she won a silver medal at the 1999 Summer Universiade. She also won a gold medal at the 2003 Pan American Games.

She started the 100 meters hurdles in 2004 and finished fourth at the 2004 World Indoor Championships. She also had the best time of 12.37 seconds at the August Olympics and later won the 2004 World Athletics Final. She is currently serving as track and field coach at Harvard-Westlake School in Los Angeles, California.

Joanna Dove Hayes was born on December 23, 1976, in Williamsport, Pennsylvania. She went to John W. North High School in Riverside, California where she engaged in active sports especially athletics. In 1995, she took the first position in the 100 meters and 300 meters hurdles races at the CIF California State Meet. The Track and Field News named her the national Girl's ‘High School Athlete of the Year.’
Career

She continued with her career as a hurdles’ athlete even after high school. She competed in several races including the NCAA Outdoor Championship. However, as she was competing, she got an injury which kept her off the course. Having suffered the knee injury in the 1997 competitions, she also suffered from a strained hamstring in 2001. Her active participation in athletes was at a stand-still for some time once again. She spent much of her off times at the Jackie Joyner-Kersee Youth Center East St. Louis, Illinois as an employee.

After the injury break, Joanna Hayes moved back to Los Angeles in 2002 and started a full-time training to prepare for the Olympics Games in 2004. With a fit back to track shape, she competed at the 2004 Olympic Games in Athens setting a new best time of 12.37 in the 100 meters hurdles. She won a gold medal making her the second American in athletics history ever to win the title.

Joanna Hayes was the second American athlete to ever win the gold medal in the Olympic Games. She has founded the Joanna Hayes Foundation Fund at The Community Foundation. The foundation has helped children who live in deplorable conditions to acquire necessities. It has also been at the forefront to provide hope for them in realizing that they have a real future. The foundation also promotes and funds sports, education and community activities which have helped children develop skills that are healthy and sustaining.

In December 2010, Joanna Hayes gave birth to her first child named Zoe and took time off to take care of her family. In 2012, she made her comeback to competitions. She is the daughter of Ted Hayes who is an advocate for the homeless in Los Angeles. She is currently a coach on track and field at Harvard-Westlake School in Los Angeles, California.  On October 11, 2014, she was inducted into the UCLA Athletics Hall of Fame. She is currently forty one years old.