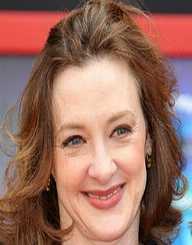 Joan Cusack was born on 11th October 1962, to Dick and Ann Cusack. She was born in New York City, New York, in the United States. Cusack has two sisters and two brothers, all of whom have tried their hand at acting. The most notable is John, younger brother to Joan Cusack. Her father was a filmmaker, and her mother is a retired mathematics teacher.

Cusack graduated from the University of Wisconsin-Madison in 1984.

Joan Cusack started acting in 1980, with support roles in two movies that year – Cutting Loose and My Bodyguard.

Over the next few years, she was in seven more movies, until her breakthrough role came in 1988 when she acted in Working Girl. Cusack was nominated for three awards, and she won two of them.

Joan Cusack has also been in 12 television series, although Cusack did have a break from television during the 1990s. Some of her appearances include 17 episodes of Saturday Night Live in 1985 and 1986 and 44 episodes of Shameless from 2011 to 2015.

Cusack has been nominated for several awards, and has won the following, as well as others:

In 1996, Joan Cusack married Richard Burke. He is President and CEO of Envoy Global, Inc, as well as being an attorney. The couple have two sons.