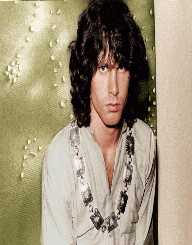 Jim Morrison is very popular for his genres of music. He is known as the lead singer for his band Doors. He is also known for some personal singles as well as albums by his name. With his sudden change in his music genres, he was always and well remembered for his break in rock music. Jim Morrison is so much loved and hated. His drug addiction is very bad for him and his influence on people. He lived a life filled with controversy and even wrote several books. He was popular with his poems as well as music and known to have his band profiled as a high profile band.

Jim Morrison was born in Melbourne, Brevard County, Florida in the United States. He was born on the 8th of December, 1943 to a future Admiral, George Stephen, and Clara Morrison. He happened to be the eldest of his parents’ child. He, however, had an accident while he was four years old and he witnessed an American Indian family being killed by accident. This scared him so much and later recounted the experience in his songs Dawn’s Highway, Peace Frog, and Ghost Song.

The young Jim Morrison schooled at California where he spent most of his years. He later went to Alameda High School California before finishing his high school education at George Washington High School. He had his university education in Florida State University. There, he took part in a school recruitment film which made him appeared in the film. Jim Morrison got arrested during a football game prank. He later went to theUniversity of California where he studied Comparative Literature. He got a lot of inspiration from Antonin Artaud. He was inspired by the Surrealist and dark poem. He got his undergraduate degree in University of California film school. He made two films while pursuing his degree – First Love and Obscura.

After his graduation from UCLA in 1965, Jim Morrison led an unconventional life at Venice Beach. He formed the band, The Doors with his fellow mate, Ray Manzarek. John Densmore and Robby Krieger later joined this band. The name of the band was said to have been taken from Aldous Huxley's book The Doors of Perception. It formally became a Rock Band in 1965. He was known for writing most of the songs for the band while the guitarist adds several lyrical contributions to the writing. The band started gaining prominence and acclaim as one of the most powerful rock band. It got its first national recognition after it had a deal with Elektra Records in 1967. They made a hit single, Light My Fire, which reached the top spot on the Billboard Pop Singles Chart.

The Doors appeared on various popular TV shows including The Ed Sullivan Show. This show introduced them to the global audience. Jim Morrison and his band then created a promotional film, Break on Through which was their first single release of the first album. They also made many video music after this. Later, the band has become one of the most sought-after and popular rock band in the US. They, however, released their second album Strange Days. This band mix blues, rock with psychedelia in the production of the song. It was then that the band introduced their band’s psychedelic form of music. Jim Morrison was known to have taken black and white photos from a photoshoot that was organized by Photograph Joel nicknamed The Young Lion. This photoshoot was arguably one of the best as it upholds Jim’s iconic status. Most of his photos were used in magazines, covers, and compilations of items of The Doors.

In the late 1960s, Jim Morrison started taking drugs and coming to studio recordings in his drunken states. Most time, he would arrive at live performance late, and this will make one of his band members perform. He allegedly vexed the audience trying to spark a riot among the crowd. He failed and was arrested. Thus, The Doors concerts were called off.

Jim Morrison lived most of his life with his partner Pamela Courson. He wrote off most of his estates and properties to Courson who died at a young age like him. Morrison was known to have spent time and lived with numerous ladies/ He was also alleged to have had sex with numerous fans and celebrities during the hale days of his career.