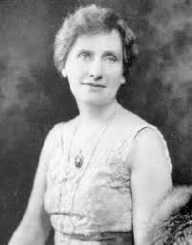 Nellie Davis Tayloe was born on November 29, 1876, in the city of Saint Joseph, Missouri. Her father was James Wynns Tayloe, and her mother was Elizabeth Blair Green. Both of her parents came from wealthy old families. When she was seven years old, her family moved to the town of Miltonvale, Kansas. A few years later, they moved to Omaha, Nebraska.

Nellie Davis began her education with private tutors. She then attended the Miltonvale High School. After graduating, she enrolled at a teacher-training college. She spent the next few years teaching kindergarten and giving private piano lessons.

In 1900, Nellie Davis was visiting her relatives in Dover, Tennessee. There, she met a young lawyer named William Bradford Ross. She married him in 1902. The two of them moved to Cheyenne, Wyoming. They had four sons, named George, James, Alfred, and William. Nellie spent her time taking care of the children and the estate. She worked on some educational programs at the Cheyenne Woman’s Club. She advised her husband and supported his career.

William Ross became the governor of Wyoming in 1922. In 1924, he passed away from complication from an appendectomy. The Democrats nominated Nellie Ross in the run for governor. She was initially hesitant because of her lack of experience. She still managed to win and became the first female governor in the U. S. She continued her husband’s policies, such as tax cuts and protection for manual workers.

In 1926, she ran for re-election. She lost by a small margin. She remained active in the Democratic Party and often attended political events. She traveled and campaigned for Democratic candidates. She served as the director of the Women’s Division of the Democratic National Committee.

In 1933, President Franklin D. Roosevelt gave Nellie Ross the position of director of the U. S. Mint. She was the first woman ever to hold that job. She was also the first woman to hold any critical federal position. She was very efficient and managed to improve the Mint after the Great Depression.

She installed new machines, resulting in faster production and lower costs. She started manufacturing the Franklin half dollar coin. She retired in 1953, after serving five terms. After that, she occasionally wrote articles for different magazines.

Nellie Ross passed away on December 19, 1977, in her home in Washington, D. C. She was 101 years old. She was buried at the Lakeview Cemetery in Cheyenne.